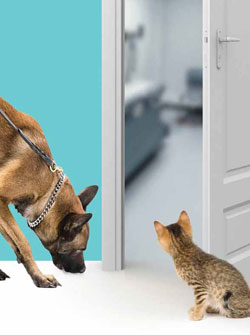 Dental disease is the most common condition among dogs and cats examined at small animal practices across the United States. Otitis externa is also a common problem, and many dogs and cats are overweight. Flea infestation is increasingly more common, and heartworms and other internal parasites continue to be a concern across the country.

These findings are from Banfield Pet Hospital's State of Pet Health 2011 Report, the first of its kind. The report, which Banfield released in late April, draws on medical records of about 2.1 million dogs and nearly 450,000 cats that were patients at Banfield's 770 hospitals in 2010.

"Since we're the only ones who have access to this many pets and this much data, we just felt it was our responsibility to share it broadly with the profession," said Dr. Jeffrey S. Klausner, Banfield's chief medical officer. "We want to expand this in future years, but we thought we'd start on preventative care. That's what I know we can do better on." 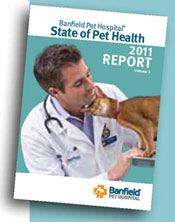 "Most pets are healthy, and we want to keep them that way," said Dr. Elizabeth M. Lund, senior director of research for Banfield Applied Research & Knowledge. "What happens in vet school is you get focused on the minority of the problems that pets have, so you sort of lose perspective on what the majority of pets experience—which is health, with some challenges like fleas and otitis."

Along with providing data about the prevalence of common preventable conditions, the Banfield report reveals that small dog breeds have become more popular in the past 10 years.

In addition, the report states that "one of the biggest challenges facing the veterinary profession is the medical care of cats," as veterinarians treat far fewer cats than dogs.

The real message coming out of these data is that clients need to go see their veterinarian at least once or twice a year. And veterinarians probably need to do a better job of helping clients understand why that's important.

Dr. Klausner expressed concern that increases in certain preventable conditions in dogs and in cats could reflect decreases in veterinary visits by some pet owners.

Banfield provided JAVMA News with lists of the top 10 diagnoses for dogs and cats in 2010, which are not available in the report (see chart). Dr. Lund said researchers weighted many of the statistics in the report on the basis of age distribution of Banfield's canine and feline patients in 2005 to allow for comparisons of data between 2006 and 2010.

In 2010, according to the lists of top diagnoses, dental calculus was the most common diagnosis for both dogs and cats, ahead of the diagnosis of "healthy pet."

According to the report on pet health, dental disease affected 78 percent of dogs and 68 percent of cats over the age of 3.

"With at least once-a-year professional cleanings and some work at home in between those cleanings, most dogs and cats don't have to suffer from dental disease," Dr. Klausner said.

"It's a very important disease, and it's probably been overlooked a bit in the research," Dr. Klausner said.

Dr. Lund noted that treating chronic infections is much more difficult than preventing them.

Diabetes mellitus was not one of the top 10 diagnoses for dogs or cats at Banfield hospitals in 2010, according to the lists of top diagnoses, but being overweight was in the top five for both canine and feline patients.

"I'm really concerned about this trend of overweight and obesity in pets," Dr. Lund said. "Half our pets are 2 and younger— we do see a young pet population at Banfield—and for it to be in the top five for our pets is huge."

According to the report on pet health, heartworms and other internal parasites remain a problem in pets.

Overall, however, roundworms and tapeworms were more common in dogs than heartworms.

According to the lists of top diagnoses, tapeworm infection was among the top 10 diagnoses for cats at Banfield hospitals in 2010, with tapeworm tests being positive for 5 percent of cats tested. Roundworms were the second most common internal parasite in cats, according to the report on pet health.

In addition to providing data about disease prevalence, Banfield's report on pet health documents the increasing popularity of small dogs.

The number of Chihuahuas among Banfield patients increased 116 percent between 2000 and 2010, while the number of Shih Tzus increased 87 percent. These dog breeds are now the second and third most common, respectively, at Banfield hospitals.

Labrador Retrievers remain the most common dog breed among Banfield patients, but their numbers decreased 20 percent between 2000 and 2010. German Shepherd Dogs dropped from No. 2 to No. 6 at Banfield hospitals, with a decrease in numbers of 40 percent.

The number of pit bull–type dogs increased by 47 percent in the past 10 years.

Banfield provided JAVMA News with additional statistics, not available in the report, revealing that the ratios of canine to feline patients and canine to feline veterinary visits have become more disproportionate.

"It's definitely been a change for Banfield, and I think it reflects basically what's going on in the profession," Dr. Lund said. "It's concerning."

"A lot of people who have both dogs and cats, they bring the dog in, but they don't bring the cat in," Dr. Klausner said.

For the State of Pet Health 2012 Report, Dr. Klausner said, Banfield probably will turn its attention to additional chronic diseases but continue to emphasize the prevalence of common preventble conditions.

"The real message coming out of these data is that clients need to go see their veterinarian at least once or twice a year," Dr. Klausner said. "And veterinarians need to probably do a better job of helping clients understand why that's important."

Banfield is distributing the State of Pet Health 2011 Report to a wide audience. Copies went to Banfield's field directors, medical directors, and field trainers; deans at veterinary colleges; and other partners in industry and the profession. The report is available at www.banfield.com by searching for "state of pet health."