Sir John McFadyean did not bear fools lightly. Frequently he would take lazy, sloppy, or just plain wrong researchers to task in the pages of the publication he created, The Journal of Comparative Pathology & Therapeutics, or in speeches. The most famous of these incidents came in 1901 at the British Congress on Tuberculosis in London. 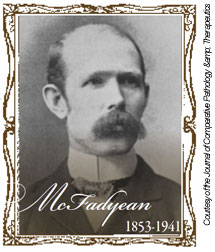 Robert Koch, the German doctor who gave the first description of the tubercle bacillus in 1882, surprisingly had stated that no precautions were needed to be taken against milk or flesh from cattle afflicted with tuberculosis because bovine TB differed from the infection found in humans.

Dr. McFadyean had been invited to speak two days later on the danger milk from cattle with TB posed to humans. And he did, vociferously, against a man he respected and gained much knowledge from in his own studies of tuberculosis.

Though controversial, Dr. McFadyean stood by his principles and was vindicated 10 years later after continuous experimentation and investigation by the British Royal Commission.

'Newest and best in science'

Dr. McFadyean was born in 1853, the son of a tenant farmer in Galloway, Scotland. While working the farm, according to "John McFadyean: Founder of Modern Veterinary Research" by Iain Pattison, occasionally a veterinarian would come, "But the young McFadyean realized that in spite of his dexterity, the vet did not often truly know why an animal coughed, or could not pass its dung."

The profession interested Dr. McFadyean, so he attended the Royal (Dick) Veterinary College campus in Edinburgh. He graduated in 1876, just when the earliest discoveries of Louis Pasteur and Koch were being revealed. Dr. McFadyean understood immediately the significance of the germ theory of infectious disease.

"McFadyean did not want to be a veterinary practitioner. He could never be satisfied to treat animals empirically with crude materials. He craved the science that he knew must lie, as yet untouched, behind and beyond the empiricism euphemized as the veterinary art," Pattison wrote.

Dr. McFadyean sought to learn the newest and best in science, which led him to enroll at the Faculties of Medicine and Science of Edinburgh University. He paid for his schooling by lecturing in anatomy at the veterinary school.

In the 1880s, Dr. McFadyean was the only veterinary pathologist in Britain.

"Iron-willed, capable of incredible physical and mental labor, he coaxed, cajoled, and bludgeoned the veterinary profession into the scientific era," Pattison wrote.

In 1888, after already having published two textbooks, he started a new scientific journal, The Journal of Comparative Pathology & Therapeutics, to be issued quarterly with him as the sole editor. He intended it to be an outlet for his scientific observations and personal opinions.

Dr. McFadyean then became the first professor of pathology and bacteriology and dean at the Royal Veterinary College in London in 1892. Two years later he was appointed principal of the school. Year after year, chronically short of money, space, and equipment, he made discoveries of the greatest importance to the understanding and control of animal diseases, according to Pattison.

In the first issue of the journal for 1903, Dr. McFadyean recorded a peculiar staining reaction of the blood of animals that died of anthrax. All textbooks of bacteriology now describe "The McFaydean methylene-blue reaction in anthrax," an important aid in its diagnosis.

He was knighted in August 1905 for his contributions to scientific knowledge in Britain.

Dr. McFadyean's work didn't stop there. His description in 1918 of the microscopic pathology of Johne's disease, for example, has remained a definitive picture. Equally, his epidemiologic study in the same year of the strange nervous disease of sheep called scrapie has the same importance decades later as when it was written.

The following year, along with Dr. J.T. Edwards, Dr. McFadyean wrote a long description of the baffling disease of foals called joint-ill, and another paper on a disease, usually of horses, called botriomycosis. Also in 1919, Dr. McFadyean had a research worker's most satisfying experience, namely, confirmation by another laboratory of an original observation, Pattison wrote. During their studies a decade earlier, he and Sir Stewart Stockman had concluded that an organism that they called a spirillum could cause abortion in sheep; this had now been confirmed, and the organism was found to be a cause of abortion not only in sheep but also in cattle, and was named Vibrio foetus.

Besides being a gifted researcher and teacher, Dr. McFadyean was a tough and able administrator, with a distaste for humbug that became legendary in his lifetime. He later resigned as principal of the London college in July 1927 at the age of 73.

"McFadyean had become an autocrat, and autocracy, however benevolent, can be irksome," Pattison wrote.

"McFadyean truly was a great veterinarian. Much of his success was due to the fact that he was conversant with veterinary science and research on a universal scale," wrote Clifford Formston in "Reminiscences about Sir John McFadyean and Tom Hare."

In honor of World Veterinary Year, JAVMA is highlighting key international veterinarians from the past 250 years.