The Drug Enforcement Administration has proposed designating the anesthetic propofol as a schedule IV drug under the Controlled Substances Act because of the potential for abuse.A proposal to list the anesthetic propofol as a controlled substance has elicited a mixture of reactions from veterinarians, who disagree on whether the designation would be an undue burden. 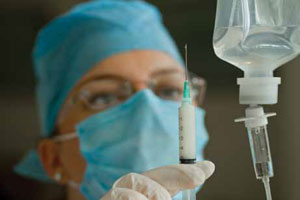 In late 2010, the Drug Enforcement Administration solicited comments on a proposal to list propofol as a schedule IV drug under the Controlled Substances Act because of the potential for abuse. The agency restricts the use of schedule IV drugs to DEA registrants, and imposes various requirements on users, including security and record keeping obligations.

As support for its concerns about propofol abuse, the DEA cited a survey of 126 academic programs in human anesthesiology. Eighteen percent of programs reported diversion or abuse of propofol between June 1995 and June 2005. Seven of 25 propofol abusers on record had died of overdose.

Most veterinarians wrote in opposition to the proposal, arguing that the abuse of propofol is not common enough to justify designating the drug as a controlled substance at the expense of veterinary practices in terms of time and cost.

Some veterinary organizations opposed scheduling propofol, and others did not. The AVMA's comments to the DEA focus on addressing difficulties with disposal of propofol if the drug becomes a controlled substance.

"The DEA cites research that 28 percent of drug abusers of propofol die as a result of this abuse, so the AVMA understands the DEA's actions to stop diversion of propofol from its intended use," said Dr. Ron DeHaven, AVMA chief executive officer. "However, propofol is also an effective drug used in veterinary anesthesia, and we want to make sure that the burden of disposing of it under the DEA's rules doesn't discourage veterinarians from utilizing propofol."

In comments to the DEA, the AVMA expressed overall concern that scheduling propofol might result in a decrease in use of the drug by some veterinarians because of the burdens of registration, record keeping, and disposal under DEA rules.

Regarding disposal, the AVMA noted that propofol becomes unusable within a short time after a vial is opened and that veterinarians often use only part of an open vial. The AVMA expressed concern that if propofol becomes a controlled substance, DEA rules might not allow veterinarians to continue disposing of unusable propofol into an absorbent substance for incineration or disposal as solid waste.

Working with the AVMA Committee on Environmental Issues and Council on Veterinary Service, the AVMA Council on Biologic and Therapeutic Agents and Clinical Practitioners Advisory Committee wrote comments to the DEA. Among the authors was Dr. Charles A. Lemme, owner of Blairs Ferry Pet Hospital in Cedar Rapids, Iowa, and representative of the American Animal Hospital Association on CPAC.

"I think as long as the disposal issue can be taken care of, that probably most practitioners will continue to use it like they have been," Dr. Lemme said. "The bookkeeping aspect of it, while it's a pain, we deal with that all the time with other drugs."

The Texas VMA was one of the veterinary organizations that opposed the proposal to schedule propofol.

In comments to the DEA, the Texas VMA wrote that it "urges the DEA not to list propofol as a controlled substance because the benefits of such a listing will be far outweighed by the negative impact it will have on the veterinary profession and the pet owning public."

"It would be a pain if it became controlled. I mean, we would still use it. But I think some practices wouldn't use it ... if it had to be put under lock and key."
— Dr. Gregg K. Takashima, President, American Animal Hospital Association

The Texas VMA expressed concern that veterinarians could be left without any injectable anesthetic agents that do not require registration, record keeping, and disposal in accordance with DEA rules.

Etomidate is one anesthetic agent similar to propofol that is not a controlled substance, said Dr. Robert E. Meyer, president of the American College of Veterinary Anesthesiologists. Nevertheless, he said, etomidate is very expensive and can have adverse effects such as acute adrenocortical suppression.

The ACVA did not submit comments on the proposal to schedule propofol, instead offering input on the AVMA's comments. Dr. Meyer said the ACVA believes that propofol should become a controlled substance because of the abuse potential.

"Having it as a controlled substance is inconvenient, but it is appropriate," said Dr. Meyer, a professor at Mississippi State University College of Veterinary Medicine. "The ACVA believes it's not really an excessive burden on practicing veterinarians, as a number of other agents that we use daily for anesthesia of veterinary species are controlled substances."

The American College of Laboratory Animal Medicine wrote to the DEA asking the agency to reconsider the proposal to schedule propofol. Among its comments, ACLAM expressed concern that scheduling propofol will result in little decrease in abuse potential.

"It would be very easy for anyone involved in handling or administering propofol to overstate the amount used for the procedure and to divert the overage for personal use," ACLAM wrote.

The American Veterinary Distributors Association wrote to the DEA asking the agency not to schedule propofol because of the burden this would place on veterinary distributors.

While AAHA did not submit comments on the proposal to schedule propofol, AAHA president Dr. Gregg K. Takashima said the organization's leaders generally agreed with the AVMA's comments—that scheduling propofol could lead to a decrease in use of the drug and that the DEA would need to address the disposal issue.

"It would be a pain if it became controlled," Dr. Takashima added. "I mean, we would still use it. But I think some practices wouldn't use it ... if it had to be put under lock and key."

The DEA proposal, supporting materials, and public comments are available at www.regulations.gov by searching for the docket number, DEA-2010-0022. The comment period has ended.