Three laboratories have concluded that the sudden die-off of as many as 5,000 red-winged blackbirds in an Arkansas city on New Year's Eve was the result of blunt-force trauma.

The conclusion of the Southeastern Cooperative Wildlife Disease Study, released in January, concurs with earlier findings by the Arkansas Livestock and Poultry Commission and the U.S. Geological Survey's National Wildlife Health Center.

Bacteria, viruses, heavy metals, pesticides, and avicides were ruled out as potential causes of death, but tests did find hemorrhaging consistent with blunt trauma. "In most instances, such traumatic injuries in wild birds are due to flying into stationary objects such as trees, houses, windows, power lines, towers, etc.," the report concluded. 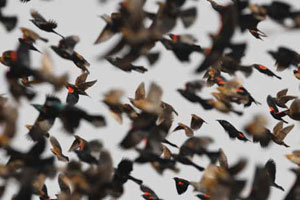 On the night of Dec. 31, 2010, between 4,000 and 5,000 blackbirds fell to the ground in Windwood, a neighborhood in Beebe, Ark. Witnesses reported unusually loud noises in the area shortly before the incident, most likely fireworks.

Blackbirds have poor night vision and typically do not fly after dusk. Wildlife officials theorize the fireworks forced the startled birds to fly at a lower altitude than normal. Windwood residents did observe the birds flying at rooftop level and flying into structures and other objects.

The roost flock near Windwood is thought to consist of 1.6 million birds.

Weather radar was used to document the width and breadth of the event. Sidney Gauthreaux, PhD, has used Next Generation Weather Radar to archive bird movements and to track migration routes and stopover areas for more than a decade. He says the cloud of birds rising from their roost is documented.

"There is no question that the exodus of birds from the roost is visible in the radar display images," said Dr. Gauthreaux, a zoology professor and creator of Clemson University's radar ornithology laboratory. "The first exodus occurred about 10:20 p.m. and contained approximately 6,000 to 7,000 birds per cubic kilometer. At 11:21 p.m., another pulse of birds with a slightly smaller density left the roost."

Dr. Gauthreaux's report states no severe weather was over or near the roost at the time.

The Arkansas Game and Fish Commission flew over Windwood in a helicopter to gauge the scope of the event. No dead birds were found beyond the initial area of fallen birds.