More information has been released on North American racetrack fatalities, with a specific focus on the effect racetrack surface has on fatality rates.

The study "Comparison of racing fatality rates on dirt, synthetic, and turf at four California racetracks" showed that racing fatalities declined 37 percent after dirt track racing surfaces were converted to synthetic racing surfaces over a six-year period. The study's results also showed that the difference in fatality rate between dirt and synthetic surfaces was, in fact, significant.

Yet the study's author, Dr. Rick M. Arthur, equine medical director for the California Horse Racing Board, noted that the use of synthetic surfaces remains controversial and needs further study. He presented his findings Dec. 8 at the American Association of Equine Practitioners 56th Annual Convention in Baltimore.

In the meeting proceedings, Dr. Arthur wrote that, although racing fatalities have decreased, many trainers are convinced that synthetic surfaces are associated with an increased incidence of long-term, nonfatal injuries and an increase in hind limb injuries. 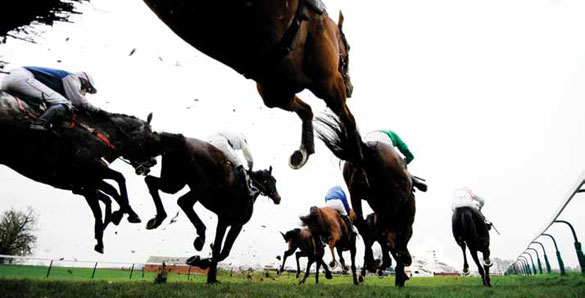 "Unlike the decrease in racing fatalities," he wrote, "there does not seem to be a similar decrease in training fatalities on California's synthetic tracks. Efforts are underway to better evaluate the non-fatal-injury issue, but all objective parameters examined to date ... have all failed to support that synthetic tracks result in increased long-term non-fatal-injury rates. Veterinarians and trainers report that synthetic surfaces are associated with a different menu of injuries than seen on dirt. This would not be surprising; many surgeons have reported a drop off in arthroscopic surgeries on synthetic tracks."

Dr. Arthur also pointed out that synthetic surfaces have proved to be inconsistent and difficult to maintain for racing and training. Sunlight and temperature fluctuations, neither of which were factors on California dirt surfaces, have caused track superintendents to develop new maintenance techniques to keep tracks consistent after heavy use, he wrote.

Although racing fatalities may have decreased on synthetic surfaces in the study, there is little confidence that the reduction in racing fatalities can be maintained, Dr. Arthur added. The synthetic tracks simply wear out much more quickly than anyone anticipated, and the cost of maintenance and refurbishment could prove too much for the tracks to handle.

Notably, the similarity of turf-racing fatality rates to the fatality rates on dirt and synthetic is the opposite of reports outside North America. Turf racing internationally on the flat is generally well below 1 fatality per 1,000 starts; California turf racing is two times that, with more than 2 fatalities per 1,000 starts. Dr. Arthur wrote that a reasonable conclusion would be high racing fatality rates in North America are related to more than just track-surface factors, but perhaps other factors such as shoeing practices or genetics.

In another look at horse racing fatalities in North America, the Jockey Club released updated statistics from its Equine Injury Database, the North American database for racing injuries, in a Dec. 15, 2010, press release.

The analysis was performed by Dr. Tim Parkin, a veterinarian and epidemiologist from the University of Glasgow, who serves as a consultant on the Equine Injury Database.

"The addition of 376,000 starts to the database in year two enabled us to statistically validate certain trends seen in the data," Dr. Parkin said in the press release. "Trends will continue to emerge and evolve as additional data becomes available for study and as more complex statistical analyses are performed. This will allow us to understand how different variables, alone and in concert, may impact the risk of fatality."

Among other trends gleaned from Dr. Parkin's analysis of the cumulative two-year data were these:

A list of racetracks that have signed up to participate in the Equine Injury Database can be found at www.jockeyclub.com/initiatives.asp.