Postmortem given on equine piroplasmosis

American Association of Equine Practitioners members have played a critical role in the detection of clinical cases of equine piroplasmosis in recent years, according to a leading expert on the infectious disease. 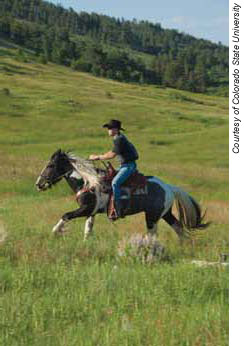 “This is why it’s important that equine veterinarians be familiar with the clinical signs, means of diagnosis, and the current situation related to equine piroplasmosis,” said Dr. Josie L. Traub-Dargatz, professor of equine medicine at Colorado State University College of Veterinary Medicine & Biomedical Sciences. She moderated an in-depth session on EP Dec. 5 during the AAEP Annual Convention in Baltimore.

EP is considered a foreign animal disease in the United States, and detection of infected horses prompts a regulatory response. Since 2008, infected horses have been detected in three segments of the equine population—among horses imported prior to 2005, horses associated with a ranch in south Texas, and Quarter Horses detected through movement testing that are primarily involved in racing.

Dr. Traub-Dargatz said that natural tickborne transmission of Babesia equi occurred on the south Texas index premise but not outside the geographic area.

Ticks aren't the only method of transmission of EP agents, though. Transfer of blood, whether through reuse of needles and syringes or blood transfusions, can also transmit the disease agents. Surveillance testing and educational outreach to horse owners and trainers may be the most effective way to mitigate iatrogenic spread, Dr. Traub-Dargatz said.

Clinical signs of EP can include anemia, jaundice, dark brown urine, fever, lethargy, colic, and weakness and poor performance; however, some horses show no clinical signs at all. That's why practitioners must remember to alert the laboratory that they are specifically looking for EP agents when sending blood samples from animals they think may be infected, Dr. Traub-Dargatz said. During an outbreak, multiple tests are used to identify infected horses, including a complement fixation test and competitive enzyme-linked immunosorbent assay, or CELISA.

Two major outbreaks in the past few years illustrated the two methods of transmission and the importance of properly diagnosing EP and reporting suspect cases to regulatory officials.

Dr. Mike Short is equine program manager in the Division of Animal Industry at the Florida Department of Agriculture and Consumer Services. He spoke about the 2008 outbreak of EP in Florida that was first identified when a clinically ill horse was admitted to a referral hospital in Ocala on Aug. 11 of that year. A sample sent to the University of Florida College of Veterinary Medicine for further study confirmed that EP-like organisms were present in the red blood cells. Further testing performed at the National Veterinary Services Laboratories in Ames, Iowa, confirmed the agent was Theileria equi.

State officials first quarantined the suspect farm and two adjacent ones, although ultimately, 25 farms would be quarantined. Of the 210 horses tested, 20 horses from seven farms were found to be positive for T equi. One horse had a severe, acute infection; two had chronic infections; and three had mild acute infections. The rest of the infected horses were not clinically ill at the time of the investigation.

Investigators ruled out ticks as vectors after they examined all the horses and conducted extensive environmental surveillance. Instead, they found almost all the horses were involved in nonsanctioned Quarter Horse racing, or "bush track" racing.

The primary language spoken on the farms was Spanish, making it difficult to obtain valid information from these farm owners, Dr. Short said. In addition, few paper records existed, and officials often had to rely on verbal recollections about where the horses had come and gone. Barn names of the horses changed from farm to farm, and many weren't even microchipped.

Since 2008, infected horses have been detected in three segments of the equine population—among horses imported prior to 2005, horses associated with a ranch in south Texas, and Quarter Horses detected through movement testing that are primarily involved in racing.

The farms saw no veterinarian regularly. Instead, managers and trainers typically medicated the horses. "When investigators arrived, there was a large syringe used to treat multiple horses in the barn," Dr. Short said.

Investigators determined the source of the organism was most likely Mexico. On the farm with the most case (six), all of the infected horses came from Mexico, with several reported to have been smuggled across the border.

In the end, all farms were released from quarantine Feb. 12, 2009. Nineteen of the test-positive horses were either euthanized or shipped to a U.S.-approved research facility, and one died of unknown causes while in quarantine.

A few months later, in October 2009, Texas had a rash of EP cases, but under different circumstances.

Dr. Angela Pelzel is the Western regional epidemiologist for poultry and equine diseases in the Veterinary Services branch of the Department of Agriculture's Animal and Plant Health Inspection Service.

She said the index case was a Quarter Horse mare brought into a south Texas veterinary clinic. It was confirmed to be infected with B equi by the NVSL.

The index ranch is located in the southernmost part of Texas on 875,000 acres spanning six counties. Out of the ranch's 360 horses tested, 292 were positive for B equi, and B equi infection was found in all four of the ranch divisions. There were no risky husbandry practices, but there was heavy tick infestation. Tickborne transmission was later determined as the cause of EP spread on the index ranch and on four high-risk premises located near the index ranch.

Approximately 2,500 horses were tested in the outbreak. These horses were direct traces from the index ranch, horses exposed to positive horses, and horses considered to be dangerous contacts because they spent time on the ranch or were foals born to infected mares. In all, 412 infected horses were identified.

"You need specific high-risk factors on a given premises to efficiently transmit B equi to other horses by tickborne transmission-multiple infected horses, heavy infestation by competent tick vectors, and long periods of time in high-risk conditions," Dr. Pelzel said.

Looking to the future

The aftermath of the outbreaks saw more states require EP testing to enter racetracks, including New Mexico, Texas, Oklahoma, Colorado, Iowa, Louisiana, and Arkansas. This has resulted in more than 60,000 U.S. horses being tested for EP in 2010 at the NVSL. Thousands more have been tested for movement purposes at recently approved laboratories located in Texas, New Mexico, Colorado, Oklahoma, Kentucky, Florida, Louisiana, and Arkansas, just in the past year.

In addition, Dr. John Clifford, APHIS deputy administrator for Veterinary Services, asked for the formation of the National Equine Piroplasmosis Working Group. This 20-member group was charged with documenting the current national perspective on EP and has provided recommendations to the USDA, APHIS, and VS.

Interim control recommendations were completed in February 2010 and incorporated into guidance documents. These give detailed guidance to state and federal animal health officials on the management of infected horses, which involves lifelong quarantine, exportation, or euthanasia. An option to enroll quarantined horses in an approved treatment research program is included in the guidance.

The working group recently completed long-term recommendations and submitted them to the USDA, APHIS, and VS leadership. These recommendations address additional response recommendations, surveillance, education, outreach, import issues, and the national disease status. Risk analysis projects and research on transmission, diagnostic testing, and disease treatment are also in progress.

An owner information sheet in English and Spanish titled "Protect Your Horses from Equine Piroplasmosis" is available on the APHIS website at www.aphis.usda.gov/animal_health by clicking on the links "Animal Diseases" and "Piroplasmosis."