Hospitalizations for dog bites in the United States jumped 86 percent over a 16-year period, according to a recent government analysis.

This past December the Department of Health and Human Services' Agency for Healthcare Research and Quality announced the total number of people hospitalized because of dog bite-related injures had increased from 5,100 in 1993 to 9,500 in 2008. 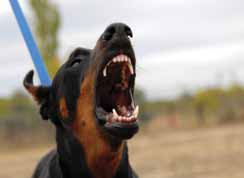 The AHRQ based its estimates on data from the Healthcare Cost and Utilization Project's 2008 Nationwide Inpatient Sample—the largest inpatient care database in the United States, containing information from approximately 8 million annual hospital stays—and the 2008 Nationwide Emergency Department Sample. Historical inpatient data were drawn from the 1993-2007 NIS.

An estimated 4.7 million people are bitten by dogs annually in the United States, according to the AVMA and Centers for Disease Control and Prevention. Of those, some 800,000 receive medical attention. The AHRQ report suggests a relatively small number of dog bite victims require more intensive treatment.

Infection is the number one reason for hospitalization, the report stated, followed by open wounds on the extremities and wounds on the head, neck, and trunk. Other injuries ranged from fractures to blood poisoning.

Males were seen in the emergency department at a higher rate for dog bites than were females—110.4 versus 97.8 visits per 100,000 people—whereas there were no gender differences in dog bite-related hospital stays, according to the report.

"Emergency Department Visits and Inpatient Stays Involving Dog Bites, 2008" is available on the Healthcare Cost and Utilization Project website, www.hcup-us.ahrq.gov, by clicking on "Reports," then "Statistical Briefs," and finally "Emergency departments." The report is also posted on the AVMA website here.