Ohio may have avoided ballot fight

And the governor will push for new restrictions on dog breeders and exotic pets owners as well as more severe punishments for cockfighting.

Under an agreement negotiated with Gov. Ted Strickland, organizations that include the Humane Society of the United States, the Ohio Farm Bureau Federation, and agricultural commodity groups will together recommend that the recently created Ohio Livestock Care Standards Board implement the following standards: 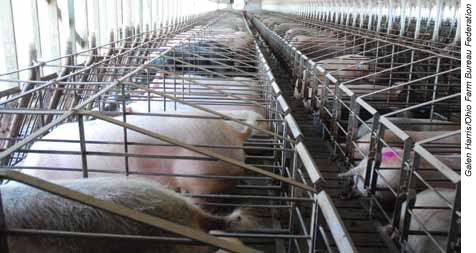 Ohio could adopt new rules for housing and euthanasia of livestock and treatment of downer cattle.

The governor will also recommend passage of bills that would make it a felony to train or use a rooster for cockfighting and would create new dog breeding rules involving licensing, insurance, inspections, dog health certifications, housing, medical procedures, and punishments for mistreatment. The Ohio Department of Agriculture and Department of Natural Resources are also expected to develop regulations that would affect the sales and ownership of "wild and dangerous" animals, including big cats, bears, primates, constricting and venomous snakes, alligators, and crocodiles, according to a draft of the agreement provided by the governor's office.

Strickland announced June 30 that, because of the agreement, the HSUS and other organizations such as Ohioans for Humane Farms agreed to stop pushing for a ballot initiative this November. He said the new rules and laws will enhance animal welfare and care while keeping a strong agriculture industry.

"Instead of expending tens of millions of dollars and unproductive energy fighting an acrimonious campaign through the fall, both sides will be able to continue investing in our agricultural base and taking care of animals," the announcement states.

Robert J. Boggs, director of the Ohio Department of Agriculture, said the recommendations provided through the agreement were helpful but not necessarily indicative of the rules the Ohio Livestock Care Standards Board would pass. He thinks many people mistakenly believe the board will rubber-stamp the agreement rather than seek input from the public and animal care experts prior to acting on the proposals.

Boggs noted that the board has to agree on the language of any new rules and accept public comments prior to implementation, which he expected would take at least six months.

Dr. Tony M. Forshey, Ohio's state veterinarian and a member of the Ohio Livestock Care Standards Board, said the agreement is good for the state, but the board will consider the components of the agreement as a set of recommendations and treat them in the same manner as recommendations from any other group.

"The Livestock Care Standards Board is an independent, stand-alone board within the state of Ohio, and it will reach its decisions based on what are believed to be the best interests of the entire state in each species for animal care," Dr. Forshey said.

Species-focused subcommittees to the board's Technical Research Advisory Committee are expected to examine the possible impacts of the recommendations and how they fit with industry standards, Dr. Forshey said. The subcommittees, each of which includes at least one veterinarian, will work with the committee to develop recommendations for the whole board.

But the agreement could become void if its provisions related to livestock and ownership of wild and dangerous animals do not become law by the end of 2010, according to the draft document. The HSUS could then pursue the ballot initiative.

Jack Advent, executive director of the Ohio VMA, expects the standard-setting board will honor the agreement, although its members need to figure out how to implement and enforce the terms of that agreement as they apply to animal agriculture.

The ballot initiative's cancellation was like the dissipation of a violent storm, and it will allow agricultural workers to focus on producing food, Advent said. He thinks the ballot initiative debates would have been divisive, expensive, and pointless. The opposing groups should be able to sit down and work out their differences, Advent said.

Although Advent thinks the Ohio VMA should have been involved in the final negotiations, he hopes the organization will be represented in future welfare policy discussions. He expects the OVMA will continue its work with the Ohio Livestock Care Standards Board and provide resources as the board works to turn pieces of the agreement into law, as well as with state legislators as they examine the proposals involving cockfighting and dog breeders.

The Ohio VMA has supported efforts to increase the penalties for cockfighting, Advent said. The organization has seen a need for regulation of commercial large-scale breeders, provided any rules do not hurt good breeders.

As for the rules regarding exotic animal ownership, Advent said the OVMA agrees with the premise that many people are not suited to care for certain types of animals and that some animals are not suited to life in Ohio. He expects implementation will be difficult, and said that the OVMA will offer assistance to the governor and any agencies that will be involved in drafting the regulations.

The proposed ballot initiative would, if approved, have forced the Ohio Livestock Care Standards Board to adopt new rules similar to those proposed under the agreement regarding livestock housing and euthanasia and downer cattle. But the proposed initiative would have also forced facilities to phase out existing battery cages and sow gestation stalls and mandated that animals be given room to lie down, stand up, fully extend their limbs, and turn around freely for most of any given day.

The governor thanked Jack Fisher, executive vice president of the Ohio Farm Bureau Federation, and Wayne Pacelle, CEO of the HSUS, for committing to "a good faith discussion" that led to an agreement that balances welfare and economic concerns.

Although the Ohio VMA has experienced some trying conversations owing to differences among members and their clientele, Advent said the organization provides a haven for people to talk out issues. The OVMA's leadership is relieved that the agreement removes some divisive issues from consideration, and Advent thinks the agreement will address animal welfare concerns and serve owners of agricultural and companion animals.