New research on the biology of aging in dogs suggests a link between shortened life expectancy and ovary removal. 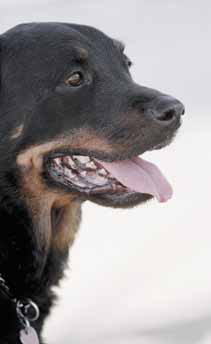 The finding is important because the average life expectancy of Rottweiler dogs is 9.4 years, observed research team leader Dr. David J. Waters. "Our results support the notion that how long females keep their ovaries influences how long they live," he said.

Dr. Waters is the executive director of the Gerald P. Murphy Cancer Foundation at the Purdue Research Park in West Lafayette, Ind. The foundation is home to the Center for Exceptional Longevity Studies, which tracks the oldest living pet dogs in the country.

Although the findings may challenge long-held notions about pet neutering, Dr. Waters believes veterinarians shouldn't dismiss the research outright but, instead, see it as an exciting development in pet longevity research.

"It was once considered a fact the earth was flat, and then somebody's data said otherwise. That's what scientific discoveries do—they reshape the intellectual terrain," said Dr. Waters, who is also associate director of Purdue University's Center on Aging and the Life Course and a professor in the Department of Veterinary Clinical Sciences.

Dogs are a good model for cancer studies in humans, and now there's growing support for using pet dogs in research aimed at helping people live longer lives. The National Institute on Aging, for instance, issued a call in November for information on the feasibility of studying pet dogs to advance the study of human aging.

Dr. Waters' team spent a decade collecting and analyzing medical histories, longevity, and causes of death for 119 Rottweilers in the United States and Canada that survived to 13 years of age. These dogs were compared with a group of 186 Rottweilers with more typical longevity.

Researchers found that female Rottweilers have a distinct survival advantage over males—a trend also documented in humans. That advantage appears to be determined by whether the female dog is sexually intact, however. "Taking away ovaries during the first four years of life completely erased the female survival advantage," Dr. Waters said.

The Rottweiler research mirrors the findings of the Nurses' Health Study published in May 2009 in Obstetrics & Gynecology by William Parker, MD, and colleagues from the John Wayne Cancer Institute in Santa Monica, Calif.

Dr. Parker's group studied more than 29,000 women who underwent a hysterectomy for benign uterine disease. The findings showed that the benefits of ovary removal—protection against ovarian, uterine, and breast cancer—were outweighed by an increased mortality rate from other causes. As a result, longevity was cut short in women who lost their ovaries before the age of 50, compared with those who kept their ovaries for at least 50 years.

How ovaries affect longevity in Rottweilers is not understood, but Dr. Waters' research points to a new set of research questions, recalibrating the conversation about removing ovaries.

"We liken this to an ecosystem," Dr. Waters explained. "If you take the caterpillars out of an environment, what are you left with? I'm betting that like removing all the caterpillars, removing ovaries has unanticipated, unforeseen consequences. An adverse effect on longevity might just be one of those consequences."

Does Dr. Waters recommend that every dog owner delay their pet's ovariohysterectomy? Not at all. In fact, he cautioned against overgeneralizing the study findings, saying much more research is needed.

"We studied purebred dogs living with responsible owners. You could say our results aren't pertinent to stray dogs or mongrel dogs. I don't believe every Rottweiler or every woman will benefit from keeping ovaries. That's an all-or-none stipulation, and that's not how biology works," he said, adding that tomorrow's challenge will be to identify which individuals benefit from retaining or removing ovaries.

To meet the needs of veterinarians who want to better understand the biology of aging, Dr. Waters developed a Gerontology Training Program for DVMs at Gerald P. Murphy Cancer Foundation, based on his experience teaching biogerontology to graduate students for more than a decade at Purdue. As longevity research advances, veterinarians need to be prepared. "We make the surest progress when cutting-edge research and cutting-edge education go hand in hand," Dr. Waters said.