Recognizing the threat to animal and human health, the federal government has launched a multimillion-dollar initiative in the hopes of preventing the next global pandemic.

The U.S. Agency for International Development announced Oct. 22 the start of its Emerging Pandemic Threats program, a five-pronged approach to preparing the world for emerging infectious diseases. It builds on the agency's long-standing programs in disease surveillance, training, and outbreak response.

"While no one can predict with certainty where the next pandemic disease will emerge, being ready for early detection and rapid response will minimize its potential impact on our social and economic well-being," said Murray Trostle, deputy director of USAID's Avian and Pandemic Influenza Preparedness and Response Unit. 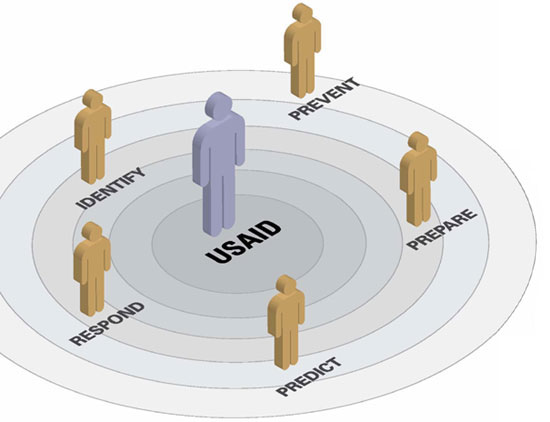 The focus of the EPT program is to pre-empt or combat, at their source, newly emerging diseases of animal origin that could threaten human health. The five projects in the EPT program are as follows:

• PREDICT: The University of California-Davis School of Veterinary Medicine, the Wildlife Conservation Society, the Wildlife Trust, the Smithsonian Institution, and the Global Viral Forecasting Initiative are expected to receive funding from USAID of up to $75 million over a five-year span to implement a global early warning system. These five leading experts in wildlife surveillance will monitor for emerging diseases and increase the local capacity in "geographic hot spots" where wildlife host species, such as bats and rodents, have substantial interactions with domestic animals and high-density human populations. The goal is to more broadly address the role of wildlife in facilitating the emergence and spread of new diseases. The award builds on USAID's current monitoring of wild birds for the H5N1 influenza virus.

• RESPOND: A coalition of technical resources comprising the Tufts University's Cummings School of Veterinary Medicine; Development Alternatives, Bethesda, Md.; the University of Minnesota's School of Veterinary Medicine; Training and Resources Group, Arlington, Va.; and Ecology and Environment Inc., Chicago, is expected to receive up to $185 million in a five-year cooperative agreement with USAID. The project's aim is to strengthen countries' capacity to identify and respond to new disease outbreaks in a quick and sustainable manner. This will be done by developing outbreak investigation and response training. The agreement adds to the more than 30 years of USAID experience in building long-term capacities in health training through U.S. and local academic institutions.

• IDENTIFY: The World Health Organization, the United Nations' Food and Agriculture Organization, and the World Organization for Animal Health (OIE) will work through existing grants to support the development of laboratory networks and strengthen diagnostic capacities in those areas thought most likely to be the source of emerging diseases.

• PREPARE: The International Medical Corps will provide technical support for simulations and field tests of national, regional, and local pandemic preparedness plans. This is to ensure that countries have the capacity to implement response plans effectively during pandemic events. The project could receive up to $6.65 million within a three-year time frame.

Dr. Jonna A. Mazet is the UC-Davis scientist leading the PREDICT component of the program. She directs the Wildlife Health Center within the new One Health Institute at UC-Davis' veterinary school.

Dr. Mazet said as a veterinarian, she can't think of a more important thing to use her training for than helping stop the next global pandemic while, at the same time, investigating human health and protecting animal species.

"We're thrilled the U.S. government and world are recognizing the veterinarian's role in looking at these huge one-health issues," Dr. Mazet said. "The one-health initiative has been helpful in improving recognition of veterinarians and helping us to be leaders in something as big as this."

Dr. Mazet also is encouraged by the EPT program's comprehensive approach to preventing the spread of emerging diseases.

"There's a level of complexity not usually addressed in public health," Dr. Mazet said of the program. "In the end, it's the only way to solve and predict where the next huge disease will be coming through."

Just within the past decade, outbreaks of H5N1 avian influenza, severe acute respiratory syndrome, and 2009 Novel H1N1 influenza have demonstrated how zoonotic diseases can threaten health and economies around the world.

"For many years, the veterinary community has been well aware that the majority of infectious diseases are zoonotic, but this understanding is new to many other professions and the public," said Dr. Marguerite Pappaioanou, executive director of the Association of American Veterinary Medical Colleges.

"But with the spread of highly pathogenic H5N1 avian influenza virus and the anthrax bioterrorism attacks in 2001—important events leading to increased public awareness—USAID started to get involved with H5N1 internationally and saw the lack of understanding and poor coordination between governments' ministries of health and agriculture in detecting and responding to outbreaks."

The document calls for the United States to take the lead against global pandemics, working with global health organizations to establish a surveillance system that better integrates the human and animal health sectors, resulting in improved early detection and response. Thus, the EPT program was born.

Dr. Pappaioanou, who co-chaired the panel, is excited over the program's creation. The way things work now, she said, is that a new zoonotic disease in people raises global concerns, which leads to massive amounts of money from governments going toward treatment and care.

"200 billion dollars globally was spent on response for emerging zoonotic diseases in the last 10 years, so it's not that we don't have the money, but it is how we choose to spend it," Dr. Pappaioanou said. "The question is, 'Can we build the political will that should lead us to a much better outcome—that is, of prevention and earlier detection that would require smaller and less costly global response?'"

We're thrilled the U.S. government and world are recognizing the veterinarian's role in looking at these huge one-health issues. The one-health initiative has been helpful in improving recognition of veterinarians and helping us to be leaders in something as big as this.

Historically, Dr. Pappaioanou said, it has been harder to get countries to invest in ongoing, systematic surveillance, prevention, and early detection programs, particularly when resources were limited, compared with getting them to responds to an existing disease threat. In many cases, it is resource-poor countries, with under-resourced veterinary services that are least able to develop and sustain effective surveillance and response systems, where zoonotic diseases have been most likely to emerge.

"It's in our collective, global best interest that all countries do surveillance and are capable of responding effectively, including developing countries. If new diseases are detected and dealt with by the country where they emerge, this keeps them from spreading and threatening the shores of all other countries. It is a public good," Dr. Pappaioanou said.

She continued, "USAID has taken an important first step with this huge initiative and critical investment. The hope is other development agencies, donor organizations, and countries will follow. The hardest part is starting—building the critically important political will to act and breaking down barriers between human and animal health authorities to facilitate their working together to address this growing challenge to national and global health."

Dr. William B. Karesh heads the Global Health Program of the Wildlife Conservation Society. He also knows as well as anyone the challenges the EPT program faces.

The initiative he is working with, PREDICT, will focus on the so-called drivers of emerging disease. Geographic areas where emerging diseases are likely to occur have been identified, but factors associated with disease emergence vary.

Dr. Karesh points out that in Southeast Asia, many of the emerging diseases have a lot to do with trade and wildlife, particularly the markets where wild and domestic animals mix with humans. Meanwhile, South Asia's concerns stem from the pressure put on wildlife by human population growth, which forces contact between the groups. In South America, deforestation has caused migration of humans and livestock into areas that were fairly untouched before, such as the Amazon Basin. Central Africa has issues with emerging diseases coming from its widespread bush meat trade.

In these cases, different approaches may be required to prevent emerging diseases, but an adaptive strategy also will prove paramount.

"The real key to success is if we can train local people in these countries not just to do procedures well but also to learn how to adapt their processes, and when this project is over, they can continue to do the work and modify their approaches as needs change," Dr. Karesh said.

The wildlife veterinarian has heard concerns that the EPT program isn't providing enough money to guarantee that no disease will emerge again. His reply?

"Well, no, it isn't, but could we reduce it by 30 percent or 50 percent? That would make a huge difference to the world," he said.

Dr. Karesh gave the example of smoking in the U.S., which is now down to about 20 percent of the population, a marked improvement over a figure that once was closer to half or more.

"If we can get this moving in the right direction, we can have a great impact on world health," he said.