One health, from your backyard to the global village

In the backyard, on the farm, at the veterinary clinic—humans, animals, and environments everywhere interact to share one health.

The One Health Initiative has promoted this one-health concept for several years. Now the One Health Commission has been launched to help address, more directly, interdisciplinary health issues in the United States and throughout the global village. 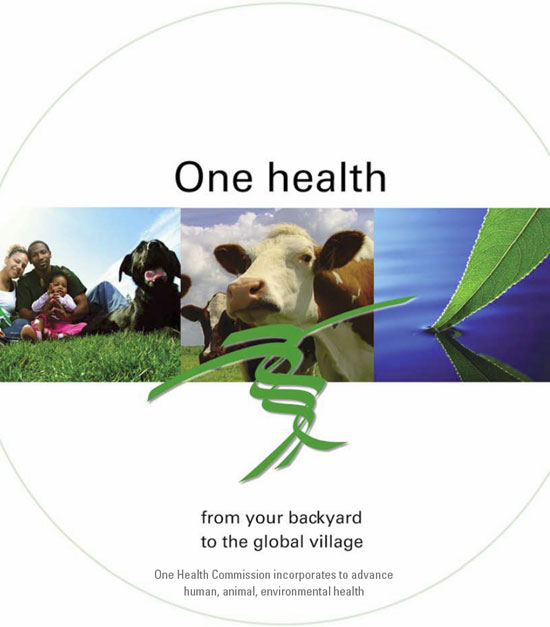 On June 29, the commission incorporated as a nonprofit organization. Its main mission is to increase cooperation among health professions and other groups to prevent and treat zoonotic diseases and other medical conditions common to humans and animals.

Dr. Roger K. Mahr proposed the One Health Initiative in July 2006 when he took office as AVMA president.

"It's been very rewarding to see the collaborative effort that has involved many individuals and many entities to bring the One Health Initiative through these past three years to the current point of establishing the One Health Commission," said Dr. Mahr, who has been serving as project director and will serve as the commission's interim CEO.

Along with the AVMA, the American Medical Association and American Society of Microbiology have been among the strong supporters of the One Health Initiative.

"The development of the national commission is an important collaboration between human medicine, veterinary medicine, and environmental medicine—plus the additional support of microbiology, which covers across these disciplines," said Albert Osbahr III, MD, the AMA representative to the commission.

Retired Brig. Gen. Michael B. Cates, DVM, AVMA representative to the One Health Commission, thinks the nation needs to increase the quality and decrease the cost of human health care. He said the commission's strategy to improve public health could include promoting preventive over restorative medicine and accounting for animal health and environmental issues, along with increasing cooperation across medical disciplines.

"Engaging in one health is particularly important at the local practitioner level because more than 60 percent of human diseases are multihost pathogens," Dr. Mahr said.

Veterinarians and physicians can inform clients about zoonoses as well as conditions common to pets and people, such as obesity and cancer.

Along with its strategy for public health, the One Health Commission will develop a research agenda relevant to the one-health concept.

Drs. Cates and Mahr said the pandemic of H1N1 influenza—a combination of swine, avian, and human influenza strains—shows a need for additional research and action on animal diseases, including government surveillance. Dr. Cates added that recent outbreaks of foodborne illness in humans show a need for government and academia to find better solutions in that area.

Awareness of one health

Communicating the one-health concept was the focus of a number of recommendations from the original One Health Initiative Task Force. The final report of the task force, "One Health: A New Professional Imperative," is available here.

One recommendation from the task force was to hold a One Health Summit.

"The summit will be instrumental in enhancing the visibility of the concept, deriving key strategies and actions beyond the current recommendations, and helping build a strong group of alliances and a supportive coalition," according to the report.

Dr. Mahr said the summit, currently on the schedule for this fall, will be part of launching the One Health Commission.

The One Health Initiative Task Force also recommended commissioning a study of one health by the National Academy of Sciences.

The One Health Joint Steering Committee, which coordinated the transition from the task force to the commission, established contact with the National Academies about conducting a one-health study. Dr. Mahr said the proposed study would identify priorities for research plus other opportunities to enhance interdisciplinary cooperation, strengthen education, and improve disease surveillance.

Vision to reality, local to global

The One Health Commission will spend the upcoming months largely on operations and planning.

Most immediately, Dr. Osbahr said, the commission needs to establish membership and leadership and find sustainable sources of funding. The commission also must identify centers that can support collaborative efforts, connect with academia to promote one health in education, and finish developing the One Health Summit.

"These are probably the most significant activities for one health, especially promotion of the one-health concept to gain momentum," Dr. Osbahr said.

The One Health Commission also seeks to identify model projects that illustrate the value of applying the one-health concept, and the commission might consider creating additional demonstration projects.

Dr. Mahr said World Rabies Day is an example of a project that applies the one-health concept, teaching people how vaccinating animals for rabies helps prevent rabies in humans. He said the cooperative effort will assist in assessment and control of this serious zoonotic disease.

The One Health Commission will engage international groups such as the World Health Organization, World Organization for Animal Health (OIE), and United Nations Food and Agriculture Organization to extend U.S. efforts in one health globally.

"I think anything that we do, we have to have the vision of extending to impact globally," Dr. Cates said.

With the ease of international travel, Dr. Cates said, almost any infectious disease in the United States has the potential to spread globally—and vice versa. Nations around the world also have other health issues in common.

A motto of the One Health Initiative is "World health through collaboration." Humans, animals, and environments share not only one health but also one world.

Timeline of the One Health Initiative

April 2007: The AVMA Executive Board approves formation of the One Health Initiative Task Force.

June 2008: The One Health Initiative Task Force submits its report, recommending actions to advance the one-health concept—including establishment of the One Health Commission. The AVMA board approves formation of a One Health Joint Steering Committee to transition from the task force to the commission.

March 2009: The AVMA announces that the Rockefeller Foundation has awarded a $100,000 grant, the largest single show of financial support so far, to help establish the One Health Commission.

June 2009: The One Health Commission incorporates as a nonprofit organization.