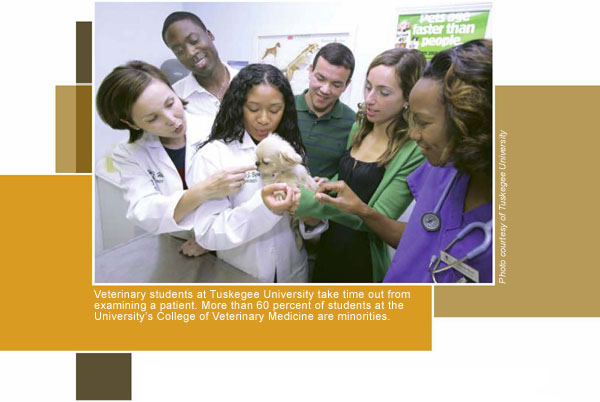 How do we get our profession to understand the value and benefit of having a diverse workforce and understand what it means to be responsible citizens and serve our society better?" ... "How do we get veterinarians, students, faculty—most of whom are in the majority, who don't understand how it really is—to get it? I think we have a lot of work to get there.

Veterinary colleges and the veterinary profession cannot be successful in recruiting students from underrepresented ethnicities and races without measurable goals based on data as well as leadership support.

That message was delivered by speakers at the 2009 Iverson Bell Symposium. It was held March 12-13 in Washington, D.C., in conjunction with the annual meeting of the Association of American Veterinary Medical Colleges.

More than 70 attended the symposium, which is the oldest in veterinary medicine dedicated to promoting racial and ethnic diversity in the profession. Dr. Tracy L. Hanner was recognized this year with the Iverson Bell Award (see story).

The theme for the 17th symposium was The Science of Recruitment. Dr. Marguerite Pappaioanou, AAVMC executive director, said that the profession needs to be diverse to meet the needs of society, but that doesn't happen by chance.

Lisa Greenhill, the AAVMC's associate executive director for diversity, gave a presentation on developing and evaluating the success of diversity programs. She said as a starting point, veterinary college officials should understand exactly how the institution defines diversity. Also, a plan should be in place that accomplishes the following objectives:

Greenhill emphasized the importance of using benchmarks. She gave examples, such as counting the number of targeted minority undergraduate students or faculty members.

Ultimately, a goal of the college should be to produce veterinary graduates and faculty who will meet the racial, ethnic, and cultural needs of society, Greenhill said.

Marc A. Nivet, EdD, chief operating officer and treasurer of the Josiah Macy Jr. Foundation, built on that message in his talk, "From fairness to excellence: a new rationale for diversity."

Dr. Nivet explained how the case for diversity has evolved over the years. In the '60s, it focused on equity and social justice. Then, during the '70s and '80s, the argument emphasized workforce needs. The '90s saw the case for quality of care, based on the idea that clients would be treated better and feel more comfortable if practitioners looked like them. Now, it is said diversity also provides improved educational and professional experiences, making everyone better practitioners.

Dr. Nivet referred to University of Michigan professor Scott Page's book, "The Difference," which explains that "... when solving problems, diversity may matter as much, or even more than, individual ability. From this we can infer that organizations, firms, and universities that solve problems should seek out people with diverse experiences, training, and identities that translate into diverse perspectives and heuristics. Specifically, hiring students who had high grade point averages from the top-ranked school may be a less effective strategy than hiring good students from a diverse set of schools with a diverse set of backgrounds, majors, and electives."

Dr. Nivet said diversity helps institutions and professions move toward their stated goals, such as excellence. At the same time, he said, there is a separate idea that diversity is somehow a competitor with excellence.

"Instead, it is part of, or a driver of, excellence. I would argue you can't call yourself an excellent institution without being diverse," Dr. Nivet said. "Cultural competence and gender understanding need to be part of the 'excellence' mission of a school."

He went so far as to say minority affairs departments are "crutches" for colleges. While these offices can make a difference, he said, it's better if the college as a whole is involved in the initiative.

Deans of three veterinary schools or colleges—Dr. Willie M. Reed from Purdue University, Dr. Warwick A. Arden from North Carolina Statue University, and Dr. Tsegaye Habtemariam from Tuskegee University—spoke about their role in encouraging diversity during a panel session.

Dr. Habtemariam said he realized how little has changed in the profession as he looked at 20 years worth of data on minority students. They showed 2 percent were black in 1985 and that figure remains about the same today.

"In 20 years, as professionals, doesn't that bother you that there's some inequity, especially for this noble profession?"

Dr. Reed said one of his challenges as dean is persuading colleagues that diversity isn't a responsibility for just him or a diversity professional but for all faculty and staff.

"When someone walks into the building, we're all going to make them feel welcome," Dr. Reed said. "I'm not going to be there forever. I want that environment to be good, long after I'm gone."

In the past few years, Purdue has become more successful in recruiting minority veterinary students. Sixteen percent of the classes of 2011 and 2012 are composed of underrepresented students, which have more than doubled since Dr. Reed's arrival in January 2007.

"I don't take credit. It's just that I communicated the message and it has happened because people are involved and engaged," he said. "The admissions committee is meeting the needs of society with students who have a variety of interests and backgrounds."

North Carolina State started an aggressive recruitment effort of minorities after Dr. Arden joined as dean in August 2004. The college's hard work has begun to pay off, Dr. Arden said, with a tangible pool of minority veterinary students.

"We got good pools (of minority applicants) but not many were admitted. We worked with the admissions committee to build classes in a different way," Dr. Arden said. "That has resulted in increased admissions. This year, to the class admitted, we have offered 14 percent of positions to minority students."

The next part of the equation, Dr. Arden says, is graduation rates. His college has seen higher noncompletion rates among underrepresented students.

"It worries me. There are many factors. It's higher among black females. We're trying to identify why this is so," he said.

The biggest obstacle, Dr. Arden said, is that while many in academia understand and embrace the concepts of diversity, a big gap exists between understanding and acting to achieve it.

He referenced a survey of veterinary students at North Carolina State a few years ago that asked whether they understood the value and concepts of diversity in the workplace. Ninety-five percent said they did. When asked whether they thought the college had adequately achieved diversity, more than 50 percent said it had. At that time, 0.9 percent of veterinary students were black.

"My point is, if you ask folks, 'Do you embrace the concept?' they get it. When you ask 'Do you know what it takes to achieve diversity?' it becomes much more nebulous," Dr. Arden said.

Even so, some would argue not everyone understands the case for diversity.

"How do we get our profession to understand the value and benefit of having a diverse workforce and understand what it means to be responsible citizens and serve our society better?" Dr. Pappaioanou asked. "How do we get veterinarians, students, faculty—most of whom are in the majority, who don't understand how it really is—to get it? I think we have a lot of work to get there."

She said education is key in that regard, and that the AAVMC is moving ahead on that front. The symposium helped focus that effort.

"What really came through in discussions is, 'So what is our view as a profession and where is that in our goals, in terms of where we're trying to get?' 'Where is the AVMA in its strategic plan, and what is happening along those lines?' ... We have a lot of work to do in our profession at large. The AVMA plans for diversity are an important adjunct and complementary focus on what is happening at our colleges," Dr. Pappaioanou said.

Dr. Reed conveyed a greater sense of urgency for change within the profession. He mentioned that with the U.S. population in 2010, 52 percent of people under age 18 will be minorities.

"With demographics changing the way they are, if we don't get our act together, it's going to be a sad day for our profession," Dr. Reed said.

PROCEEDINGS FROM THE IVERSON BELL SYMPOSIUM ARE AVAILABLE ON THE AAVMC WEB SITE, WWW.AAVMC.ORG.