By Prepared by the AVMA Group Health and Life Insurance Trust

Obesity is a public health crisis in the United States. More than a quarter of the nation's population is considered obese, with a body mass index of 30 or above—which is a major risk factor for coronary heart disease, diabetes, and degenerative joint disease. 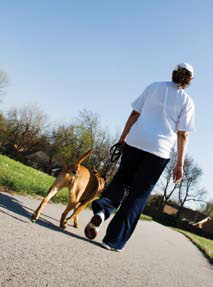 But obesity isn't just a human problem. The Association for Pet Obesity Prevention reports that nearly half the nation's pets are classified as overweight or obese by a veterinary health care provider, including 43 percent of dogs and 53 percent of cats. As with humans, obese pets are at risk for heart problems, diabetes, and joint and hip difficulties.

"Definitely, obesity in animals is a growing problem," said Dr. Derrick D. Hall, an AVMA assistant director of membership and field services and co-adviser to the Student AVMA. "The big thing with animals is that it's a controllable problem. The person feeds the animal; the animal isn't out ordering McDonalds. [Lack of] exercise is a huge issue, too. People are busy and don't have time to exercise themselves or their pets."

The AVMA Group Health and Life Insurance Trust has long recognized the dangers of obesity in humans and pets—and the positive impact that losing weight through healthier eating and regular exercise can have on quality of life for both. That is why GHLIT is supporting SAVMA's One Health Challenge III, Obesity Awareness, with a $20,000 grant to help underwrite educational programs and other activities designed to empower individuals to take control of their health and the health of their pets.

The One Health Challenge began in 2007 in conjunction with the AVMA's push for a One Health Initiative. Each year, SAVMA adopts an individual health cause to champion that also allows the organization to build partnerships with colleagues in medical and public health schools.

The decision to focus on obesity was prompted in part by the launch of the PetFit Challenge, a joint effort between AVMA and Hill's Pet Nutrition Inc. that encourages veterinary health care teams and their clients to make positive changes in pets' weight management.

"We wanted One Health Challenge III to focus on something that causes problems for both humans and animals. We also wanted it to be something that people in the U.S. could identify with," said Ryan Colburn, a student at Michigan State University College of Veterinary Medicine and SAVMA's ad hoc global and public health officer. "Human and pet obesity is a good focus for a national campaign."

SAVMA is currently working to establish partnerships with the American Medical Association's Medical Student Section and the American Public Health Association's Student Assembly to create an obesity awareness campaign and design educational programs and events that can be held at participating student chapters nationwide. Early plans include activities such as walks and 5-K runs that owners can participate in with their pets.

Tapping into the human-animal bond is an effective strategy for motivating people to make healthier eating and exercise choices. Often, pets provide their owners with the impetus they need to incorporate more exercise into their daily routines—one of the most important aspects of any weight-loss program.

"Dogs love to go on walks and runs, which increases the owner's activity level," Dr. Hall said. "The dog and the person can get a great deal of enjoyment from it. Plus, increased activity levels have the same result for people and animals; they'll burn more calories and lose weight."

Exercise not only boosts metabolism, but research also has shown that increasing activity levels while eating properly is more effective for weight loss than just changing eating habits. For humans, the recommendation is a minimum of 30 minutes of light to moderate exercise five times a week. Before beginning any new exercise routine for themselves or their pets, humans should contact their health care provider and veterinarian.

For ideas on how pet owners can spend those 30 minutes exercising with their pets, personal trainer Gunnar Peterson created special exercise videos for the PetFit campaign that demonstrate a variety of ways owners can exercise themselves and their cats and/or dogs. The videos are available on the PetFit Web site at www.petfit.com.

Adopting healthier eating habits also is important for weight loss in pets and humans. Veterinarians should work with owners to help them understand pets' nutritional needs and to discourage unhealthy snacks such as table scraps.

People who plan to reduce their own caloric intake should check first with their physician to ensure their health status allows the diet change.

The PetFit Web site at www.petfit.com features videos with exercise ideas for people, dogs, and cats.