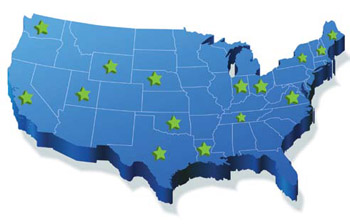 2008 already has been another busy year for state legislation relevant to veterinary and animal issues.

From January to July, the AVMA Department of State Legislative and Regulatory Affairs tracked almost 700 bills, many of which have become law. The Veterinary State Legislative Mid-Year Report is available here.

The report summarizes, by subject area, key bills that state legislators introduced or adopted—along with a few noteworthy court decisions.

Among the highlights this year, Indiana implemented a sweeping revision of its veterinary practice act, redefining the practice of veterinary medicine and the meaning of direct and indirect supervision of veterinary staff. Other important changes included the following:

Five states adopted legislation on scope of practice. Such legislation will allow nonveterinarians to practice on animals—with certain restrictions and veterinary input—in areas such as animal massage, chiropractic care, and equine dentistry.

In New York, legislators introduced a bill to eliminate the state's requirement that veterinarians and animal health technicians be U.S. citizens or permanent residents to qualify for licensure. Incidentally, a recent court decision found this requirement to violate the 14th Amendment's equal-protection clause.

Louisiana adopted a law allowing a court to enter a temporary restraining order granting the petitioner the exclusive care, possession, or control of any pets belonging to the petitioner. Several other states introduced similar bills.

The city of Los Angeles passed an ordinance requiring most dog and cat owners to spay or neuter their pets by the time the animals are four months old.

Virginia banned the use of a gas chamber for euthanizing animals.

Utah adopted the Uniform Emergency Volunteer Health Practitioners Act to authorize practitioners to volunteer their services during an emergency. Several other states are considering following suit.

States continue to adopt legislation to regulate the possession and control of dangerous dogs. The Texas Supreme Court ruled that dog owners have a duty to stop their animals from attacking a person after the attack has begun. Ohio and Tennessee are considering legislation that would have the effect of criminalizing ownership of pit bull-type dogs.

The issue of noneconomic damages also has taken up considerable time in legislatures across the country. As of July 31, none of the states had approved new legislation allowing plaintiffs to recover damages for loss of companionship, emotional distress, or pain and suffering in actions alleging veterinary negligence.

Pharmacy issues also have been prevalent. For example, several states are considering or have adopted prescription monitoring programs for controlled substances.

The AVMA's state policy analysts will update the legislative report at the end of the year to reflect further developments.