One in four dogs will die of cancer, according to the Morris Animal Foundation. 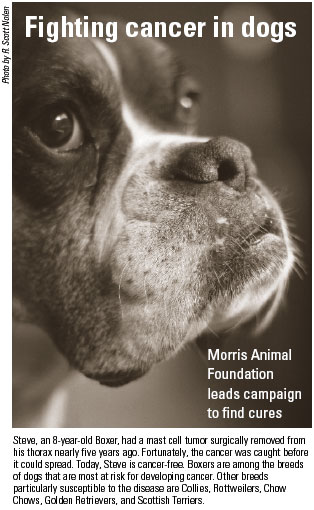 But within the equivalent of a dog's lifetime of 10 to 20 years, the foundation intends to find cures for cancer in dogs. Cancer is ranked the number one disease of concern among owners.

In April, the MAF officially kicked off the Canine Cancer Campaign, a large-scale, $30 million initiative involving multiple institutions as well as independent scientists and researchers from around the globe.

"The time could not be better as the canine genome has been sequenced, new genetic tools are available that can greatly advance this work, and scientists are ready and willing to work together for this noble effort," said Dr. Patricia Olson, the foundation's president and chief executive officer.

"What is now needed is the funding to sustain this effort, and we believe this, too, is possible," she said.

The MAF will take the lead role in securing financial contributions and managing research grants to help fund the initiative. Headquartered in Denver, the foundation has funded more than 100 cancer studies in dogs with funds approaching $7 million since its establishment in 1948.

To reach its $30 million goal by April 2012, the MAF plans to raise funds by encouraging every dog-owning, U.S. household to donate a minimum of $50 and by contacting corporate organizations for sponsorship. One recent donation to the campaign came from Pfizer Animal Health, which donated $1.1 million toward the establishment of a national canine tumor biospecimen bank.

The tumor bank falls into the sample collection and archiving part of the initiative. The other two parts are prevention and treatment.

The MAF and the American Kennel Club Canine Health Foundation provided the initial funding for the tumor bank, each committing $500,000 over the next two years.

"There is one unifying factor in the fight against canine disease that I think we can all identify with—and that's the love of our dogs," said Duane Butherus, PhD, chair of the AKC CHF's grants committee. "I know that Morris Animal Foundation shares our love of our pets, and that's why the American Kennel Club Canine Health Foundation is pleased to collaborate with MAF as we look for the preventative measures, treatment, and cures for canine cancers."

Use of funds in the tumor bank is restricted to the Canine Comparative Oncology Genomic Consortium, a group of researchers who determined that a well-described repository of canine tumor tissues was an essential resource to progress new cancer therapies. The MAF will provide the oversight to monitor the progress of the consortium in collection, storage, and distribution of the samples.

Called the Pfizer—CCOGC Biospecimen Repository, the tumor bank will be populated with as many as 3,000 high-quality samples, including 600 osteosarcomas, 600 lymphomas, and 600 melanomas, with the remaining 1,200 drawn from other cancers. The MAF estimates that it will take three years to populate the tissue bank, at a cost of approximately $2.2 million.

For the prevention part of the initiative, a large-scale cancer prevention study will assess the role of genetic traits along with environmental and nutritional risk factors.

Dr. Larry T. Glickman, professor of epidemiology and environmental medicine at Purdue University School of Veterinary Medicine, will play a key role in organizing and implementing the study.

"A lot of smaller studies have identified risk factors for cancer in dogs, primarily environmental, but now that the canine genome has been described, it gives us a chance to couple environmental with genetic for the first time, as they do in people," Dr. Glickman said.

Although still in the early planning stages, the study could involve as many as 10,000 dogs to be followed for their entire lifetime, he said.

At press time, Dr. Glickman was gearing up for a meeting in April of approximately 25 experts on cancer in dogs. The group will help prioritize future clinical trials and develop a plan for the study. Researchers and academicians from veterinary medicine and human medicine were invited to attend the meeting, the first in a series of planning sessions.

Once under way, Dr. Glickman said, the study could start producing results as soon as one to two years.

"While cancer is our major focus, since we're following these 10,000 dogs and getting medical information on them on a regular basis—yearly or twice a year," he said, "we'll know what other diseases they'll get and we can identify factors that predispose to them as well."

As for the treatment part of the initiative, the Comparative Oncology Trial Consortium has agreed to conduct clinical trials on new drugs that show promise for treating dogs currently suffering from cancer.

Part of the National Cancer Institute's Comparative Oncology Program, the consortium is based on collaborative relationships with 14 veterinary schools and colleges.

The NCI will oversee the first clinical trial, on osteosarcoma, Dr. Olson said, since success in dogs may have relevance for cancers in humans. She noted that the MAF may use other consortia from around the world to study other cancers specific to dogs.

Although the foundation's mission is solely to advance animal health and welfare, nonhuman animals are not the only species to benefit from progress in cancer research in dogs.

"Dogs hold powerful clues for human cancer," Dr. Olson said. "Canine malignancies are very similar to those in humans. If we can understand why Greyhounds are at risk for bone cancer, Scottish Terriers to bladder cancer, Golden Retrievers to lymphoma and hemangiosarcoma, Boxers to brain cancer, we just might (find) the clues to diseases that humans and dogs share."

"By studying dogs, we can answer some of the important questions about cancer prevention and treatment, and streamline the development of drugs, all of which will benefit pets and people," he said.

Dr. Waters was one of the scientists invited to participate in the April meeting to discuss research priorities for the MAF initiative.

He serves as professor and associate director of the Purdue University Center on Aging and the Life Course and as executive director of the Gerald P. Murphy Cancer Foundation. The Murphy Foundation operates PATH to Progress, a research program committed to accelerating the discovery of improved methods to treat or to prevent cancers affecting pets and people.

For more on how studies of pet dogs with cancer can help in the fight against cancer in humans, see the article "Cancer Clues from Pet Dogs," written by David J. Waters and Kathleen Wildasin, in the December 2006 issue of the magazine Scientific American.

To learn more about the Morris Animal Foundation Canine Cancer Campaign or to make a donation, call toll-free (877) DOG CURE (364-2873), or visit www.curecaninecancer.org or www.morrisanimalfoundation.org.