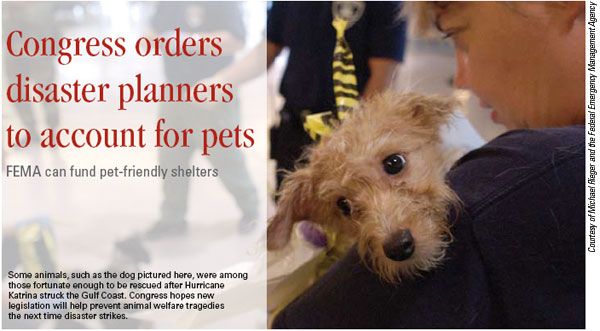 State and local emergency preparedness plans will have to make provisions for families with pets and individuals with service animals under new legislation signed by President Bush Oct. 6.

The agency can provide assistance for individuals with pets and service animals, and for the animals themselves, following a major disaster. The legislation also authorizes using federal funds to help states create pet-friendly emergency shelter facilities.

"Pet-owning families and disabled people with service animals now can rest assured that provisions for their safety and that of their animal companions will be made in case of disaster," Lantos said. "Never again will Americans with disabilities or with cherished household pets have to choose between their own safety and the animals they depend on."

The legislation is a response to Hurricane Katrina and a measure to ensure that the nation's pets and service animals aren't left behind in a disaster. When Katrina struck, many Gulf Coast residents would not evacuate because there was nowhere to go that would accept people and their pets. For instance, animals are barred from boarding rescue vehicles servicing human evacuees.

Moreover, the Red Cross bars all animals, except for service animals, from evacuee shelters for reasons of public health and safety.

According to the Humane Society of the United States, evacuations would run more smoothly if pets were included in predisaster planning. Findings of a recent American Kennel Club survey revealed that 67 percent of pet-owning households would refuse to evacuate if they could not take their pets with them.

The AVMA was among many supporters of the PETS Act. "The AVMA is encouraged to see the importance of animals during disaster response being recognized on a national level," said Dr. Cindy Lovern, assistant director of the AVMA Scientific Activities Division.

"It is our hope that, although the PETS Act is a wonderful step in the right direction, future legislation will help to assist all types of animals in disasters," Dr. Lovern continued. "We are very happy to see progress being made in this very important public health area."