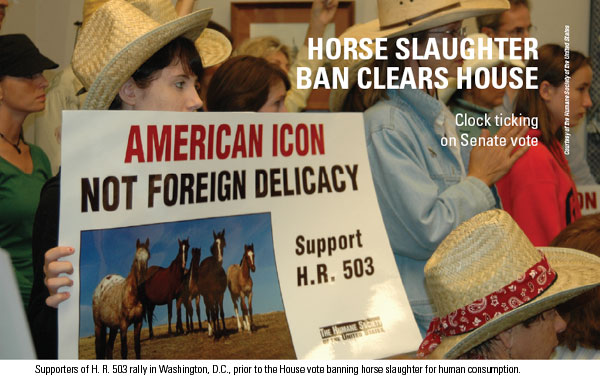 Congress came a step closer to banning the slaughter of horses for human consumption when the House passed the American Horse Slaughter Prevention Act (H.R. 503) Sept. 7 by a vote of 263-146.

But with the current 109th Congress drawing to a close, the chances of the Senate passing its version of the slaughter ban during an election year and before the legislative session ends in December were scant. Should the Senate version fail to come up for a vote, the legislation will have to be reintroduced in the next session and voted on again.

Nevertheless, proponents of the bill heralded the House vote as a victory for horses. "Americans do not eat our horses, and it is unconscionable that, for decades, we have been using federal taxpayer dollars to support a practice that the nation is overwhelmingly opposed to," said New York congressman John Sweeney, the bill's sponsor.

The United States has for years exported horse meat to France, Japan, and other countries where it is considered a delicacy. In 2005, U.S. horse meat exports were estimated at 18,000 tons with a value of $61 million, according to Sweeney, who has sought to ban horse slaughter since 2001.

Sweeney's bill would end the practice entirely, along with the domestic and international transport of horse meat and live horses to be slaughtered for human consumption.

Wayne Pacelle, president and CEO of the Humane Society of the United States, applauded the House action, saying, "Horse slaughter is simply indefensible, and polls show that the vast majority of Americans agree."

The HSUS was one of many of the bill's supporters who gathered in Washington, D.C., for a pro-slaughter-ban rally in anticipation of the House vote.

Two amendments were offered on the floor of the House. The Goodlatte-Peterson amendment would not have allowed the "bill to take effect until 30 days after the date on which the Secretary of Agriculture certifies to Congress that sufficient sanctuaries exist in the United States to care for any horses that may be unwanted as a result of this prohibition." The King amendment provided that "equines may be shipped, transported, moved, delivered, received, possessed, purchased, sold, or donated for slaughter for human consumption by Native Americans or people from other cultures that eat equine meat."

Both amendments were defeated, however, and the bill passed the House with strong bipartisan support.

A former AVMA president, Dr. Bonnie V. Beaver, called the vote disappointing and warned that the ban would adversely affect the welfare of unwanted horses.

"The (law) does not provide the financial support required to ensure that horses given up by their owners will be adequately cared for, and inadequate funding has a huge potential to create opportunities for inadequate care," said Dr. Beaver, who testified against the legislation this past July (see JAVMA, Sept. 1, 2006).

Senator John Ensign, a veterinarian, introduced S. 1915 as a companion bill to the House version of the ban in October 2005. Twenty-two of the Nevada senator's colleagues have signed on as co-sponsors of the legislation, which was referred to the Senate Committee on Commerce, Science, and Transportation.

The AVMA is one of some 200 groups in a coalition of veterinary, horse industry, and agricultural groups representing more than half a million individuals in the United States. The coalition vowed to continue fighting against the ban by defeating the Senate bill.

"The (coalition) believes that the best interest of horses and American agriculture was lost today," said Charles Stenholm, a former congressman who represents the coalition. "We will work to fight the misinformation campaign waged by our well-intentioned but misguided adversaries. The fact is that, without these federal inspectors, more horses are vulnerable to mistreatment."