Mahr calls for 'one health' initiative

Dr. Roger K. Mahr told the AVMA House of Delegates convened in Hawaii July 14 that, as AVMA president, he would work toward forming a national commission uniting veterinary and human medicine with the goal of improving and protecting animal and public health worldwide.

Dr. Mahr's plan is modeled after the creation of the National Commission on Veterinary Economic Issues, which became an official entity in 2000. The first step is establishing a Steering Committee for the One Health Initiative. Next, the committee would hold a national one-health summit that would lead to the development of an action plan. Finally, a National Commission for the One Health Initiative would be created and charged with implementing the national plan. 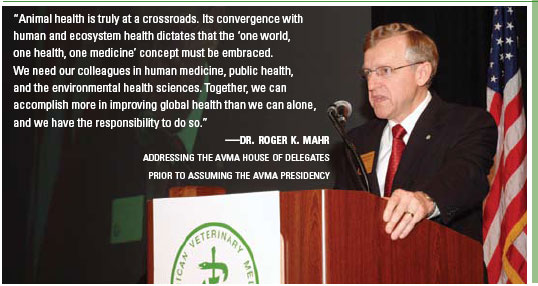 Potential outcomes of the commission include greater collaboration among veterinary colleges in developing centers of excellence for education and training in underserved areas and among the veterinary and human medical professions to address critical needs to improve animal and human health globally.

"Animal health is truly at a crossroads," Dr. Mahr said. "Its convergence with human and ecosystem health dictates that the 'one world, one health, one medicine' concept must be embraced. We need our colleagues in human medicine, public health, and the environmental health sciences.

"Together, we can accomplish more in improving global health than we can alone, and we have the responsibility to do so."

Because he ran unopposed, delegates elected Dr. Mahr of Geneva, Ill., president-elect by casting a unanimous ballot last July in Minneapolis. He was installed as AVMA president July 18 in the final days of the AVMA Annual Convention in Hawaii.

After receiving his DVM degree in 1971 from Iowa State University, Dr. Mahr owned and operated a small animal practice for more than three decades.

Dr. Mahr became an advocate of organized veterinary medicine early in his career. He served as president of the Illinois State and Chicago VMAs and has chaired the Illinois Veterinary Licensing and Disciplinary Board. Dr. Mahr also served a three-year term on the board of directors of the American Veterinary Medical Foundation.

In his address to AVMA delegates, Dr. Mahr explained that the "one medicine" concept is not new. Physician Sir William Osler, founder of the medical teaching hospital concept at Johns Hopkins University, in the 1800s wrote that "Veterinary medicine and human medicine complement each other and should be considered as one medicine."

Dr. Mahr said it is "imperative" that the AVMA play a major leadership role in the veterinary profession around the world. "It is important to share our accreditation standards with foreign veterinary colleges and to encourage them to achieve those standards if world health and safety are to be attained," he said.

Additionally, Dr. Mahr called on the AVMA to nurture existing relationships and establish new ones through the World Veterinary Association and other international bodies to encourage the advancement of the veterinary profession worldwide.