No longer are zoo habitats with green tile walls and floors, looking more like a large bathroom than an animal's natural environment, the norm. Today, many zoologic institutions strive to create habitats for their collections that are hospitable and stimulating. 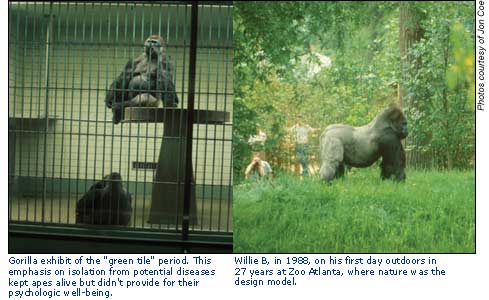 In the 1970s, large, lushly landscaped displays modeled after natural settings replaced the sterile, tiled enclosures. The shift toward naturalistic settings was followed by a rather hands-off approach to husbandry. Naturalistic displays were considered by many to be stimulating enough for the captive animals.

Coe noted that, although this approach worked well, it did not stop animals from growing bored with their environment. Boredom can have harmful effects, he added.

"Some people think the key to zoo animal welfare is to provide large, natural enclosures," said Coe, senior principal at CLR Design in Philadelphia. "An exhibit may look great, but it isn't doing much for the animal unless it also incorporates a choice of behavioral opportunities, variety, and novelty."

Behavioral and physical problems were once thought to be unrelated to an animal's environment. Yet there is growing evidence of a link between these problems and a lack of physical activity and inhospitable habitats. Research has also shown that providing captive animals with choices through an enriched environment lowers stress levels.

Several zoo exhibits over this past decade have done just that. The Woodland Park Zoo in Seattle and Sea World Florida allow some of their animals to search for and catch their food. Orangutans at the National Zoological Park in Washington, D.C., are able to travel across the zoo on overhead ropes to visit friends and potential mates.

One recent innovation brought to the United States from Europe is the rotating exhibit. In traditional displays, animals might spend their entire lives in the same space. The rotation concept allows the animals to visit several areas each day. Gorillas at the Louisville Zoo, for instance, can choose between large, naturalistic outdoor habitats or a circular arrangement of indoor rooms.

Rotation exhibits are in the works at zoos in California, Washington state, and Sydney, Australia.

Stimulating environments enhance animal well-being by promoting activity and curiosity, resulting in improved physical and mental fitness. These exhibits aren't inexpensive, however, because additional staff with greater expertise are needed, and mechanical failure is a risk. But the benefits to animal well-being far outweigh the costs, according to Coe.

In addition, zoos in Honolulu and Australia are planning elephant exhibits featuring large pools in which the animals can participate in low impact aerobic exercise.

Coe advocates more research into these activity-based zoo exhibits to more accurately assess their effects on animal health and well-being. He envisions the next stage in the evolution of zoologic designs to be when the "monkeys really do run the monkey house."

In today's paradigm, animals are entirely dependent upon their human keepers. Yet for millions of years, ancestors of today's captive animals prospered in a world of fierce competition. Indeed, it has been demonstrated that captive primates can lower their stress levels by taking control of the situation.

Coe is looking forward to the day when captive species can acquire their food through foraging or simulated hunting, and can customize their own environments, as when bears and elephants trigger fans or cooling showers without the aid of their human keepers.

These kinds of environments, Coe noted, will have their greatest applicability in wildlife sanctuaries and those institutions that reintroduce animals into the wild.