A major pilot program currently under way at participating pork farms and packing plants in the Midwest would certify swine herds passing an on-farm audit as being free of the zoonotic parasite Trichinella spiralis.

The program is intended as a model for future on-farm safety initiatives, such as shrinking the number of toxoplasmosis infections in swine.

Endorsed by a growing number of pork producers, the cost-effective initiative is expected to bolster the struggling pork industry by assuring consumers and US trade partners that domestic pork products are not infected with the parasite.

Although trichinae infections in domestic swine are rare — less than 0.013 percent according to the most recent comprehensive survey — the stigma that pork is unsafe nevertheless persists. This perception has caused some consumers to either overcook pork or avoid eating it.

Some foreign markets block US fresh pork imports because the United States is among a handful of industrialized countries not requiring slaughter inspection for the parasite, said Dr. Dave Pyburn, veterinary science director of the National Pork Producers Council. 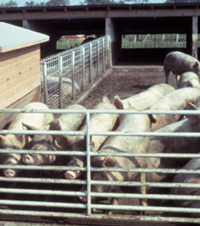 "It will give us some marketing power in the safety area," said Dr. Pyburn, a chief architect of the certification program. An added benefit of the program's sanitation practices will be the reduction of herd exposure to other harmful organisms.

Improved on-farm management practices will also give US pork producers a competitive edge over foreign competitors. In 1997, swine carcasses in the European Union were individually tested for the trichinae parasite at a cost of more than $550 million in US dollars, which surpasses the entire budget for America's Food Safety Inspection Service, Dr. Pyburn noted.

"Trichinae certification is an approach to food safety that holds the promise of being superior to the individual testing of pigs at slaughter which is the trichinae inspection process currently being used by countries we compete with in the international marketplace," said Barb Determan, NPPC president-elect.

A packing plant in Minnesota and one Iowa are participating in the test run, which began in June, as are production sites in Iowa, Minnesota, Nebraska, and South Dakota. The program will continue through next year and lead to voluntarily implementation of the pork safety program.

Supervised by the USDA-APHIS, the certification process uses USDA-accredited veterinarians to work with swine producers to ensure that factors leading to trichinae infections are minimized on farms. The veterinarians then do a series of on-farm audits to document the likelihood of infection control.

At slaughter a statistical sample of the certified herd will be tested using diaphragm digestion or enzyme-linked immunosorbent assay (ELISA) to verify absence of infection. As a further safeguard, USDA veterinarians will conduct random spot audits of certifications to ensure the program's integrity.

Developed by several USDA agencies, the NPPC, and allied industry, the program is the consummation of earlier trichinae research and certification projects during the mid-'90s. Results indicated that trichinae infections are rare, that contributing factors — rodents, feeding uncooked garbage containing meat scraps, and cannibalism of infected swine carcasses — are manageable, and that ELISA testing is a highly effective method of detecting infected swine.

At press time, between 30 and 40 veterinarians have received accreditation, with that number expected to rise above 100 following training sessions during the summer, according to Dr. Pyburn.

Although he does not anticipate great numbers of swine practitioners seeking accreditation, Dr. Tom Burkgren, AASP executive director, believes this and future accreditation opportunities will appeal to a subset of practitioners within the industry.

"I'm not sure that every swine practitioner will be involved in [accreditation programs], but I certainly can foresee in the multiperson practice that one in every practice should be going through training," he said.

Dr. Burkgren thinks the certification program is timely because of the heightened awareness among consumers to food safety issues, more so than 20 years ago. Overcoming the perception that pork is less safe than other meats will take time, he said, but the public responds positively to efforts assuring them of a safe food supply.

The certification program will be voluntary, but Dr. Pyburn believes pork producers will have to participate to remain competitive. Given the low number of infections, if a majority of the pork industry were to adopt the risk management procedures outlined in the certification program, a likely outcome could be the eradication of trichinae in domestic swine herds.

"If it were possible to put parasites within an industry on an endangered list, at the level [trichinae] is at now," Dr. Pyburn said, "it would definitely be on the list."