Detective work can pay off in kitty litter capers 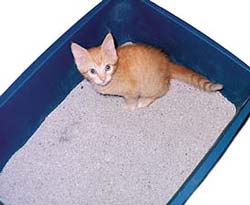 Your clients look to you not only for medical care for their pets but also to help solve behavioral problems that can unravel the very fiber of family life. Cases involving cats that deviate from litter box use can be baffling, but perseverance and detective work can often crack the case and restore harmony in the household.

On the animal behavior program at the AVMA Annual Convention, Novartis Animal Health co-sponsored a session outlining advances in understanding feline elimination behavior problems. Equating feline elimination problems to a mystery novel, speakers laid out cases they had helped their clients solve and manage. First they gathered the clues to sleuth out the likely cause(s) (differential diagnosis) and then devised a suitable treatment plan.

The first case involved a two-cat household with one litter box that was cleaned daily. The veterinarian asked the client questions about the environment and household, including the number of litter boxes, whether covered, type of litter, locations, and how often they are cleaned.

Also, what is the personality/age/gender of each cat, when did it join the household, does it ever go outdoors, is it eating well, how does it interact with other pets and family members? What is the family's profile? What are their ages, do they work, how much do they travel? Does any activity seem to coincide with instances of the unwanted behavior? If the owners have tried solutions on their own, what was the result?

In the first case, according to speaker Dr. Gary Landsberg, the veterinarian's "default diagnosis" was urine marking triggered by the presence of outdoor cats. The treatment plan was a combination of a medical evaluation that included diagnostic testing (CBC, urinalysis, serum biochemical testing, endocrine testing) as well as behavior modification (supervising, inhibiting, deterring, and counterconditioning to the outdoor cats), and environmental alterations (removing or avoiding outdoor stimulation, booby-trapping with foil a plant the cat had been urinating on).

Results of the medical evaluation revealed hyperthyroidism, and the cat's thyroid was removed surgically. By four weeks later the urine marking had stopped. The owners were displeased with the initial "misdiagnosis," and now the practice waits for histories and veterinary reports before making a diagnosis.

Six months later, the problem recurred, reopening the question of whether hyperthyroidism was really the cause, or just made the cat more sensitive to the outdoor stimuli of the neighborhood cats. Behavioral therapy consisting of supervision and booby traps stopped the objectionable behavior.

In the case of "Mewmew the mystery cat," presented by Dr. Debra Horwitz, the owners endured two years of sporadic urination outside the litter box, ostensibly triggered when they went on vacation. The owners had noticed that Mewmew usually resorted to carpeting and rugs. They had tried unsuccessfully on their own to solve the problem by pulling up rugs and carpeting, administering amitriptyline elixir, adding another litter box, confining the cat with the box, and eliminating metabolic causes by having their veterinarian do a medical workup (the cat was found to be healthy).

It is worthwhile to consider modifying the approaches attempted unsuccessfully by the owner, according to Dr. Horwitz.

The veterinarian and client developed "litter trials" with a covered box, and an uncovered box with a rug inside. The owners cleaned the boxes daily and changed the rug every other day, cleaning the rugs with an enzymatic product. They kept records.

The tactic of using the rug in the box met with success. Six months later the owners reported they were pleased with the outcome. It is possible to try to retrain a cat from the rug to litter, but most owners do not want to risk regression.

The "case of the feuding females" involved urine spraying, inappropriate elimination, and some swatting in a five-cat household. Speaker, Dr. Lynne Seibert said it was important to focus on the "usual suspects" instead of "innocent bystanders." She worked with her clients to profile each cat's personality and interaction with the others, and because of some interspecies aggression, to observe their body language.

Owners had first observed the elimination problem two years earlier at the time the household moved. The owners' previous attempts to change the behavior by administering drugs and covering windows and kitchen surfaces (the main targets) had not worked.

The diagnosis in one cat was territorial aggression toward one other cat in the household and toward the neighborhood cats outside, substrate aversion, and possible resource (litter box) defense. Another cat was fearful of that cat and experienced displacement at the litter box.

An enzymatic odor cleaner was used on the soiled areas, conflicts were minimized at the fearful cat's preferred resource by providing an escape route, and intraspecies aggression was averted by separating cats and interrupting aggressive behavior. The aggressive cat was also rewarded when she did act friendly toward the fearful cat. To remove odors on the cats, a bath towel was rubbed over them each day.

By three months postreatment, the elimination problems had been eliminated. The fearful cat was still skittish around the aggressor, but the latter had stopped stalking him.

Replying to an audience question, Dr. Seibert said a scarecrow or water sprinkler with motion detector can be helpful in keeping the negative stimulus of roaming, neighborhood cats out of one's yard. Several people said they had no success with ultrasonic methods.