Practitioners weigh in on vaccine issues

It was practitioners' turn to have their say about companion animal vaccine issues at a workshop designed to capitalize on their expertise, July 25 at the AVMA Annual Convention.

Testimony and ideas from practitioners will be added to the pool of information the AVMA Council on Biologic and Therapeutic Agents has been compiling from immunology experts, federal regulators, and industry officials for companion animal vaccination guidelines.

The essence of much of the vaccine controversy, council Chairman Donald Klingborg told participants, is that label recommendations regarding annual revaccination are based on historical precedence. Some "annual" products stimulate longer immunity than others do. Label recommendations are not scientifically demonstrated in many older, commonly used products.

For most novel antigen products licensed since 1995, label revaccination recommendations must be scientifically proved. That science, however, represents minimum duration of immunity. Manufacturers do not determine maximum duration because the process is difficult and expensive, and variations exist among animals.

An attendee asked whether anyone in the audience had seen a problem in prolonging the vaccine interval beyond the label recommendation. No one indicated they had.

A North Dakota practitioner asked whether manufacturers would provide duration of immunity information if the profession exerted collective pressure. Dr. Klingborg said, "They are responsive to markets, if it's part of your decision whether to buy a product. But they will develop it for minimum duration."

Dr. Klingborg threw out a question to practitioners: if the label were extended, would they prefer to have manufacturers develop duration of immunity studies for two, three, or four years? Four was the consensus.

Challenge other paradigms beside duration, and maybe the profession will learn more about immunity, another participant volunteered. Is a three-week initial booster interval optimal? What about maternal antibody interference?

"As practitioners," Dr. Klingborg said, "you need to look critically at label claims." The most stringent are those that claim to prevent infection or disease; the least stringent are those that "aid in prevention and control of losses associated with" a condition. He added, "Many companies are reporting some little twist in their vaccine. In most cases those vaccines are not associated with a [different] serotype."

A North Carolina State University faculty member suggested that the guidelines should address nosodes, a naturopathic approach to immunization that he says has shown no immunogenicity.

Age was raised as a consideration somewhat overlooked in its influence on immunity. Biologics are generally not tested in older animals.

A Kansas City practitioner asked why the incidence of feline sarcoma varies geographically. Dr. Klingborg said there are differences in disease rates geographically and in reporting systems.

Booster efficacy was another concern. An attendee asked whether subunit vectored vaccines are effective boosters. "I'd like to see the USDA revise its guidelines to review the efficacy of boosters for all vaccines," he said.

The predictive value of serology varies with the disease and the laboratory. New and novel products may protect without inducing traditional antibody immunity. The NCSU faculty member said, "One point that comes up around the country is using titers. There are very clear limitations on what titers can tell on the basis of in-house and out-house [analyses]."

Practitioners' common sources of liability stem from selling vaccines, providing an expressed warranty, and medical malpractice. Using a vaccine according to label, or in a discretionary manner according to sound scientific principles, does not remove the potential for medical liability. Even obtaining an informed-consent form from a client leaves the jury to decide whether the veterinarian gave the client enough information "for a reasonable person to understand."

A veterinarian/attorney in the audience said, "A potential liability for medical decision making is a fact of life in our profession. Nothing is going to change that. ... The number one thing is to talk to your clients. The second thing is to document it."

Vaccination is accepted as a strategy to protect a population, although many people expect full protection of individual animals.

Dr. William Grant of AVMA PLIT said, "The public expects 100 percent [from vaccines], and it's leaning more and more that way."

Would a veterinarian who counseled a client who chose to vaccinate his or her own animals be liable, an attendee asked, if an animal suffered anaphylactic shock or developed a sarcoma? In response, Dr. Klingborg asked whether attendees would like a prescription system for biologics. Most practitioners indicated they would. Dr. Klingborg admitted that changing the rules governing distribution of biologics would be a difficult process. He suggested possibly communicating the complexities of patient-based vaccine selection and the need for veterinary oversight in a public education program.

The effect of vaccinating less (a tenet of the American Association of Feline Practitioners guidelines) on practice economics was something many in the audience indicated was not their first concern. Dr. Klingborg asked for examples of alternative ways practitioners keep their clients coming regularly. A Wisconsin practitioner said her practice sends examination reminders to clients which mention that the animal's need for vaccines will be assessed during the visit. The council invites practitioners to send in other approaches that have worked (to AVMA headquarters, c/o Council on Biologic and Therapeutic Agents).

One veterinarian whose practice implemented the AAFP guidelines reported, "My practice has grown 20 percent [despite vaccinating less often]."

Dr. Ilona Rodan of AAFP said that in her practice, following the guidelines has gained the staff increased respect and credibility among clients.

Veterinarians spoke about the importance of widespread vaccine use, because serious preventable illnesses do still threaten. Increasing incidence of panleukopenia in Utah was mentioned, particularly in older vaccinated cats.

AVMA Drug Advisory Committee (DAC) Chairman Steve Henry said, "Our mechanism of epidemiologic data collection and assessment in the profession is extremely weak. We jump from crisis to crisis." According to Dr. Klingborg, the profession must "energize" epidemiologic sentinel sites. 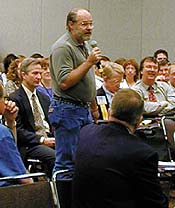 An attendee voices his concerns regarding booster efficacy

A Baltimore practitioner saw value in providing practitioners with a summary of adverse events reported by practitioners. A Texas A&M faculty member said veterinarians who call should be treated with more respect by some manufacturers. It would help to have a central place to report, said another. Dr. Klingborg suggested the US Pharmacopeia (www.usp.org), which shares the information with the USDA Center for Veterinary Biologics, the manufacturers, and the AVMA.

Dr. Henry spoke against the preference of some in industry for the designation "unexpected outcomes" instead of what they often really are, adverse reactions.

Dr. Kent McClure of the Animal Health Institute told of changes with industry in handling adverse events. The first thing to come out of a collaboration between the United States, European Community, and Japan will be a common reporting form. Dr. Rick Hill of the CVB said some new material on vaccinovigilance is forthcoming, and the CVB is working with AVMA and USP to make the current reporting system more active.

Dr. James Richards of Cornell expressed concerns with the guideline development process, noting that updated AAFP guidelines are on press. Rather than the AVMA developing guidelines for each species, he said, it might be best to have the species groups do this and avoid the potential for divisiveness. Dr. Klingborg said it's possible that the AVMA would decide to create "some broader statements" about vaccinations.

An AAFP representative explained that the AAFP developed its guidelines in response to member demand, and an American College of Veterinary Internal Medicine representative told how the specialty came to endorse them.

The council was to meet July 25 following the workshop and again in October to develop guidelines. They will go to the Executive Board and then the House of Delegates for approval.