Sit up, roll over, and heal

Spinal cord injuries, torn ligaments, and bone fractures are not exclusively human maladies. When dogs are subjected to these injuries, they must be treated with rehabilitative efforts similarly employed for human patients, to be restored to good health. It's one thing, however, to motivate a human to lift weights to regain muscle tone. How does one convince a dog that walking a treadmill and similar therapies will be in its best interest?

"You can't communicate verbally and ask a dog to exercise," said Dr. Darryl Millis, associate professor at the University of Tennessee College of Veterinary Medicine and an orthopedic surgeon. "You have to trick them into doing what you want them to do."

By "tricking," Dr. Millis means training. Dr. Millis is one of the researchers at UT who have been working toward adapting human physical therapy techniques to dogs since the mid-1990s. 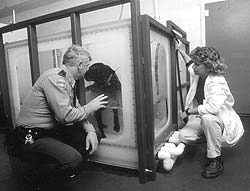 K-9 Garth has resumed his law enforcement duties, thanks to the aquatic treadmill for canids at the University of Tennessee College of Veterinary Medicine.

The program consists of several postsurgical, progressive activities and exercises, including neuromuscular electrical stimulation, passive range-of-motion exercises, and ultrasound therapy. During early rehabilitative efforts, the first hurdle is getting the animal to stand on all fours. That involves getting the animal past what Dr. Millis called their "reflex inhibitions."

"A lot of dogs with acute injuries right after surgery will keep the limb flexed up against the body because it's more comfortable. It's probably not a true reflex. It's a pain-associated tendency."

Similarly, Dr. Millis has seen dogs with chronic injuries who haven't used their limbs for up to several months.

"They get used to carrying the limb. So it's a greater challenge to get them to use it after surgery, because they've become accustomed to not using it anyway."

Getting dogs to have faith in their limbs, via positive reinforcement and increasing their trust in the process, is the key, Dr. Millis said.

"It's a confidence thing. They have to know it's okay to touch down on that limb."

When the animal begins to carry the injured limb near the ground, treadmills are employed. Dr. Millis said that there's something about being on the treadmill that often prompts dogs to use all four limbs again, and speculated it may be a reaction to the ground moving under them. Once it happens, Dr. Millis said the behavior frequently continues, and dogs begin to walk on all fours while off the treadmill. A "force plate" measures weight bearing and training responses, and the information is fed to a computer programmed to analyze the forces placed on the limbs.

With some basic training under their collars, the dogs are ready for work on a special underwater treadmill. Acquired by the veterinary college last June, the treadmill is the first of its type in the country, according to Dr. Millis. He worked with a company that builds aquatic therapy units for humans to design a machine for use with dogs.

Inside the Plexiglas box, the dog is immersed in water up to its chest. The water provides both support and resistance as the dog walks the treadmill on the bottom of the tank.

One might imagine that placing an injured dog in a Plexiglas tank of water and expecting it to walk on a treadmill is a feat more suited to Houdini. But this is no magic trick. Dr. Millis said the dogs are game for the challenge.

"Their heads are never submerged in water. The water is warm and it offers support. So they're very comfortable in the tank," Dr. Millis said. Trained dogs — like service dogs, already used to walking on command — adapt to the treadmill more rapidly.

Even lacking human qualities of self-motivation and will, the dogs have impressed physical therapists at UT with how quickly they begin to bear weight, compared with a lot of human patients. "We've noted the marked ability for these animals to want to return to function," Dr. Millis said. "They seem to have the ability to bounce back a little quicker than humans."

As technology allows dogs to be treated in ways once only available to their owners, more progress in physical therapy is expected. One idea being explored at the University of Tennessee is the creation of a therapeutic device similar to a balance board to help rehabilitate dogs with proprioceptive problems.

"Part of the process of physical therapy is bridging the gap and learning what can be done. These are the next steps in getting animals back to full function [or as fully functioning as they can], and speed that recovery."

The innovative water treadmill has already been used to help put some high-profile dogs back into service. These include Millie, Tennessee Governor Don Sundquist's family dog, and K-9 Garth, who has resumed drug-sniffing duties as a member of the Tennessee Highway Patrol's criminal interdiction team.

"It's rewarding when we can take a service animal that has time, training and money invested in it and turn that animal back into a functional working animal," Dr. Millis said, "but it's equally rewarding to get the family pet to be able to run, jump, and play with the family again."