USDA to help pets in distress

Following the devastation wrought upon North Carolina by Hurricane Floyd, the USDA, recognizing a deficiency in disaster preparedness for companion animals, brought together key organizations involved in animal relief to help them strategize how better to protect pets during natural disasters.

Composed so far of the AVMA, the American Humane Association, and Humane Society of the United States, the committee is to develop a national plan organizing all aspects of relief efforts before, during, and after disaster situations, including defining the roles of the many animal relief groups. The USDA will then encourage the states' department of agriculture to use the plan, while also advising the public to create disaster plans for their pets.

When Floyd slammed the southeastern seaboard last September, in addition to the loss of human lives and uprooting of entire communities, millions of animals were displaced, were lost, or died.

While traveling through eastern North Carolina with USDA emergency response teams assessing livestock damage, US Agriculture Undersecretary Michael V. Dunn learned that many of the animals affected were companion animals.

"I was horrified to see the number of pets that had been harmed by the hurricane," Dunn said.

Dunn said the USDA "needed to develop a strategy not only to work with livestock and agricultural animals, but with companion animals as well."

In a November meeting with the AVMA, AHA, and HSUS, Dunn told the groups the USDA-APHIS needed to be doing more for companion animals. That led to the Jan 12 meeting of the organizations with Agriculture officials in Riverdale, Md, where they announced their intention to coordinate the relief groups.

The federal government, according to Nicholas P. Gilman, AHA director of field services, is just now recognizing how companion animals and their owners are affected by disasters. "We [in the animal welfare community] are celebrating the fact that the federal government is acknowledging that this is important work and questioning how can they be involved."

Hundreds of animals were helped by the organizations, but Floyd revealed flaws in the network, namely, communication and organization. Because no one particular government agency coordinates animal relief efforts, a by-product in North Carolina was confusion and inefficiency between the organizations themselves and with state and local agencies. 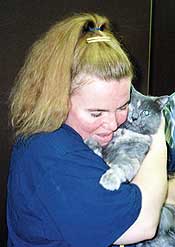 Dr. DeHaven explained that the agency's intent is to bring key relief associations and interested parties to the table to create a national disaster plan, not to take over their duties. Because the organizations understand the needs of companion animals and livestock during a disaster, and because they specialize in aspects of relief efforts, such as search and rescue, veterinary care, and housing, APHIS thought it best that the groups design the plan.

Meant to complement existing government programs dealing with livestock, the plan will identify areas where the USDA can assist with the implementation of the plan, presumably, Dr. DeHaven said, in the areas of coordination and public outreach.

Oliver Davidson, senior disaster adviser with HSUS, hoped that just as Hurricane Andrew was the catalyst for animal preparedness in 1992, Floyd will foster a new degree of understanding in relief organizations about the issues they face and how they can work together efficiently.

Their plan will be directed at the organizations themselves and as support for state and local disaster programs, Davidson said. States should have emergency plans for animals, but most don't; those that do, he said, are mostly untested.

Davidson said the USDA is creating a national disaster operation center, run by APHIS, that will help direct the national response and coordinate with other federal agencies and state authorities.

Issues the plan will address include securing locations to house and feed stray and abandoned pets and housing for people and their pets, informing the public about the importance of identifying their pets with tags, tattoos, or microchips and keeping up-to-date photos of the animals; and organizing a lost pet network for states hit by disaster that would use the existing Missing Pet Network, an online database that posts pictures of lost animals.

Though in the early stages, the committee, which has not been formally named, is working to define the roles of the relief organizations and developing standardized pet intake forms much like the ones used by the American Red Cross.

"The committee's ultimate goal," said Dr. Cindy Lovern, AVMA assistant director of emergency preparedness and response, "is that when an evacuation is ordered, every person will leave with all of their companion animals, and they will know exactly where to go. After owners check their pets into the temporary animal shelters, the relief organizations will take over."

APHIS would like to have the plan in place in time for hurricane season, Dr. DeHaven said.