Dr. Davis received the 1999 AVMA Animal Welfare Award for his work as director of the Remote Area Medical Veterinary Services, a group that launched a vaccination and spay/neuter campaign for animals on Indian reservations in July 1995. The program has since expanded, and volunteers of this organization have treated thousands of companion animals and livestock nationwide and in Guatemala, the Dominican Republic, and Paraguay. RAM Veterinary Services is a cooperative effort of a private volunteer medical group (Remote Area Medical) and the College of Veterinary Medicine at the University of Tennessee, Knoxville.

Introducing Dr. Davis at a luncheon during the Animal Welfare Forum, Dec 8, 1999 in Albuquerque, NM, Dr. James E. Nave, AVMA president-elect, said, "Dr. Eric Davis is a man whose professional life has taken him from the classroom to mobile field clinics."

Dr. Davis said, "As this planet gets smaller and smaller and, unfortunately, the gap between rich and poor gets broader and broader, which happens all the time, the welfare of these animals is probably going to be in much worse shape than it is now unless we provide some assistance."

Dr. Davis reminded the equine practitioners in attendance, "On a day-to-day basis, the horses that you and I treat and care for are generally used for sport or pleasure. The fact of the matter is, that's a tiny amount of the overall horse population throughout this planet. 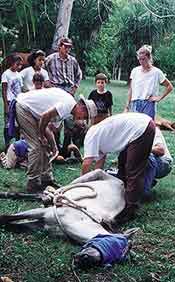 "Outside the Western developed nations ... hundreds of thousands of horses and donkeys and mules as well as draft oxen and so forth are absolutely essential to the welfare of people in the communities in which they work and the economies of those countries."

His wife, Dr. Ila Davis, a full-time shelter veterinarian and cancer researcher, accompanies him on Remote Area Medical trips. The veterinary duo doesn't have much idle time. "Eric really does lead a double life. He's always run full-steam ahead, and when we started [RAM Veterinary Services] together, he's the one who took it, to run with it," she said.

Noting that many veterinarians, veterinary students, technicians, and others volunteer for the stressful work, Dr. Davis especially thanked his wife. "One of the many things I have to thank Ila for is she reminds me on a day-to-day basis of the importance of the individual animal, and that has to be utmost in all our efforts," he said.