To chart the shift in the American conscience from pets as property to pets as companions, one would have to include the creation of the Delta Society more than two decades ago.

Since that time, the organization founded on the premise that animals contribute to human health and well-being has helped legitimize the human-animal bond on popular and scientific levels. Certain veterinary colleges have expanded their curriculum to include courses exploring the relationship between pet and pet owner, and a growing number of veterinarians are recognizing the bottom-line benefits of the "bond-centered" practice. 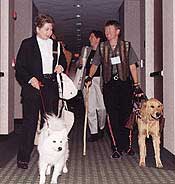 For more than 20 years, the Delta Society has encouraged mutual beneficial relationships between humans and animals.

During the past five years, federal laws have been passed protecting the relationship between pets and their elderly and disabled owners or families residing in public housing. Additionally, state regulations barring animals from health-care facilities are being lightened, allowing animal-assisted activity and therapy programs for residents and patients in these facilities.

Delta Society is continuing to build on these advances by increasing its focus on the influence animals have on human health. It's a mammoth undertaking, not only in securing funding for research and for training health care providers, but also in convincing those in the human health care and veterinary professions that searching for possible links between the two is worthwhile.

Serving as Delta's chief executive officer since 1983 has been Linda M. Hines, who worked with the late Dr. Leo K. Bustad. Dr. Bustad was one of several veterinarians and health care officials responsible for the organization's founding. The other founders include Dr. William F. McCulloch and his late brother Michael, a psychiatrist, and Dr. Robert K. Anderson.

During the society's 18th annual conference, "Science and Magic: The Human-Animal Bond," held Oct 29-31 in Cincinnati, Hines told JAVMA that since Delta's founding in 1977, its focus has primarily been on authenticating the human-animal bond. The society set about demonstrating the emotional and physical benefits of animals through initiatives that paired prison inmates with shelter dogs to be trained as companions and service dogs for people with disabilities. Cats were brought to nursing home residents, and rabbits to children in hospital burn units.

Through the 1980s, Delta funded more than $300,000 of research on the dynamic between humans and animals, while working closely with the news media to shape their coverage of animal-related stories.

"We spent a large part of our time convincing them not to do trivial stories - you know, animals wearing silly costumes. We really worked to change their mindset to show that what animals are doing is very positive," Hines said. "It's great to see the change in the media in 20 years."

In today's culture, pets are seen more as family members than throwaway items. This has paved the way for a growing number of pet-specific commodities, including behavior drugs, pet loss counselors for grieving owners, and formerly unheard of medical procedures such as organ transplants. "We've had a significant hand in creating that climate," Hines said.

With attention to the human-animal bond flourishing, the organization is preparing to strike out in a new direction. Delta's new emphasis will be to encourage clinical research that examines the positive ways animals affect human health and well-being, and to expand its programs that incorporate appropriate animals into health care.

As is the case with its Pet Partners program - which has trained more than 3,000 volunteers in six countries who provided 600,000 hours of volunteer service in 1999 in hospitals, nursing homes, rehabilitation centers, and schools - Hines is excited about Delta's plans for the Animals in Healthcare Training System. Nurses, physical therapists, and others will be taught how to incorporate animals into patient treatment. As animal-assisted therapy becomes an accepted part of complementary medicine, third-party reimbursement for treatment will become a reality, she said.

There already is some clinical evidence to support a connection between animals and human health, the most readily recognized influence being on the cardiovascular system.

The conference's keynote speaker, James J. Lynch, PhD, has served on the faculties of the Johns Hopkins Medical School and University of Pennsylvania Medical School, and as professor of psychiatry at the University of Maryland Medical School. Dr. Lynch said that while researching the effects of loneliness on human health, he documented that human contact with animals, including visual attention, has a "substantial calming effect" on heart rate and blood pressure.

American society has strong opinions about what settings are appropriate for animals, according to Hines; pets are banned in some private apartments, condominiums, parks, and other public places. In a perfect world, she said, well-behaved pets would be commonplace, even in the workplace.

"We don't really see animals as incorporated in all aspects of our lives, and that's unfortunate," Hines said. "We've drawn very strict lines in saying 'no pets allowed.'"

Hines sees that changing, however. Twenty years ago, service animals trained to assist persons with disabilities were not allowed in many public places, but Delta and other like-minded organizations changed that. With the passage of the Americans With Disabilities Act, which, among its many requirements, makes it illegal to discriminate against persons requiring assistance from service animals, the government has essentially set a precedent for integration. Working with other groups, Delta has opened human hospital doors to therapy animals.

Seeing itself as a human service organization that works with animals, Delta recognizes that an essential ingredient in any animal-related project is the veterinarian, whether in helping to write and review training guidelines or screening animals for participation in animal-assisted activities or therapy. "Right from the beginning we've known veterinarians are essential to the work that we do," Hines said.

"It's a very big piece of our message that veterinarians need to be part of the human health care team," she said. "When you talk about animals in health care situations with immunocompromised patients, the veterinarian's voice has not really been heard. And we need to have more veterinarians who are knowledgeable about what kinds of animals are appropriate in these settings, what kinds of care [the animals] need, and what their stress indicators are."

Hines is disappointed that Delta, an organization that has its roots in veterinary medicine, has so few members who are veterinarians. Practitioners who support the organization, she said, not only help their communities but also their businesses. People involved in animal therapy programs are committed to lifetime care and are "the kind of clients veterinarians want. It's an economic issue for these practices to become knowledgeable and promote these programs," she said.

Current Delta initiatives include development of a curriculum to teach people how to train service dogs - especially unwanted dogs - to work with people with disabilities, and a cooperative effort with the American Humane Association and others to create a set of humane standards for dog training.

Later that same year, following the Association of Pet Dog Trainers' annual meeting, an assembly nearly twice the size of the task force and comprising the same experience met to create the first draft of the guidelines, which have been subjected to review and revision throughout last year. Delta funded the assembly's meeting and has covered the cost to review and revise the guidelines. The final standards will be available in February from the AHA.

Also in the works is the Service Dog Education System, a comprehensive training program that teaches people how to select, train, and place service dogs. One of the key issues the system will address is the paucity of service dogs available to people with disabilities. Waiting lists are long, and training programs for the dogs often require travel and a stay at the training site.

To bring more dogs into circulation, Hines said the system will incorporate ways to evaluate dogs from shelters and breed rescue groups to determine the likelihood of their success as service animals. Begun in 1997, the curriculum is expected to be completed in 2002.

Delta is occasionally challenged for what some see as animal exploitation, but Hines responds that participants are taught how to monitor stress in their animals, so as to be sure that "both ends of the leash benefit." The curriculum also emphasizes selection of animals that will do well in training. Hines believes the animals themselves benefit from training and interaction.

"It gives them a role and a meaning, and even more, it gives them bonding time with their people; they're doing things together."