What we can do to stop soring 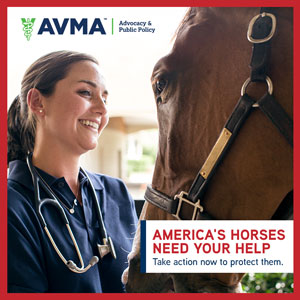 As part of our work to promote animal welfare, the AVMA has long supported policies cracking down on soring, which is the practice of deliberately causing pain to exaggerate the leg motion of a horse’s gait to gain an unfair advantage in show rings. Although soring of horses that are being transported, shown/exhibited or sold has been illegal for more than 40 years, the practice continues to be common in the Tennessee Walking Horse industry due to ineffective self-regulation, detection avoidance and budget constraints preventing enforcement.

We were pleased to see the U.S. Department of Agriculture (USDA) issue a long-awaited rule on January 13 that would address these issues and crack down on soring. This rule would authorize the USDA’s Animal and Plant Health Inspection Service (APHIS) to license, train and oversee independent third-party inspectors – meaning that horses would no longer be examined by private inspectors with potential conflicts of interest. The rule also would ban pads, which are associated with soring in walking horses, and action devices, which are items such as chains and ankle rings used in conjunction with chemical irritants to create pain when horses move. An exception would be made if a horse is receiving veterinary treatment that involves the use of pads or wedges.

Unfortunately, this rule has been suspended under a recent regulatory freeze. Now, its future is uncertain.

It’s important that this soring rule be implemented as it was written. The AVMA, along with the American Association of Equine Practitioners (AAEP), has provided significant input to the USDA to enhance the efficacy and fairness of the rule, and we were pleased to see the rule’s inclusion of elements supporting the role and importance of veterinary expertise. For instance, the rule requires that horse inspectors be independent veterinarians and veterinary technicians with degrees from schools accredited by the AVMA Council on Education and AVMA Committee on Veterinary Technician Education and Activities. Starting over and attempting to draft a new rule would be a major setback.

The AVMA and AAEP are working hard to encourage President Trump’s administration to move forward with this rule as it was released so that horses are provided with the protections they need. In addition to thanking former U.S. Secretary of Agriculture Tom Vilsack for his work on the rule, we recently sent a letter to Acting Deputy Secretary of Agriculture Michael Young asking for the final rule to be published as written. If the nominee for agriculture secretary, Sonny Perdue, is confirmed, similar communications will be directed to his office. We’re also sharing this message publicly – AVMA President Dr. Thomas F. Meyer partnered with AAEP President Dr. R. Reynolds Cowles to author an op-ed article in The Hill urging that the rule be implemented.

The AVMA is committed to ending soring. We’re looking forward to working with the USDA to implement effective policy that supports that goal.