We listened, and we’re acting, on veterinary compounding 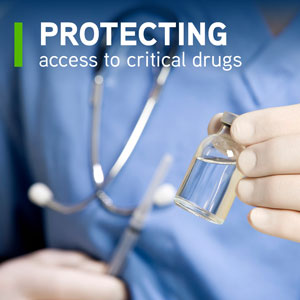 Drawing on the guidance of more than 2,000 members who contacted us about the importance of compounded drugs in patient care, AVMA today (Nov. 16, 2015) submitted formal comments to the U.S. Food and Drug Administration (FDA) identifying bulk drug substances that need to be available for outsourcing facilities to use when preparing compounds to be maintained as veterinary office stock.

This submission and another letter that we submitted in August, commenting on the FDA’s proposed new overall framework for regulating compounding, ensure that the voices of America’s veterinarians will be heard and considered as the FDA finalizes its approach to regulating veterinary drug compounding. Today's comments included this letter to the FDA and two lists of bulk drug nominations: one for cats, dogs and horses; and the other for zoo animals and wildlife.

Our comments to the FDA were guided by the input we received from a wide range of members and allied veterinary medical organizations, who told us in no uncertain terms how critical compounding is and who gave us much-needed specifics of the compounded preparations they use to treat patients.

The AVMA continues to have serious reservations about FDA using or maintaining any lists of compounding ingredients. However, we consider it critical to cooperate with the agency, which holds enforcement power in this arena.

The FDA contends that all medications compounded from bulk ingredients are illegal. Despite that, it released new draft guidance this summer describing conditions under which it generally does not intend to initiate enforcement action against state-licensed pharmacies, licensed veterinarians, and facilities registered as “outsourcing facilities.” It also requested nominations of bulk drug ingredients to include on a list from which outsourcing facilities would be able to create compounded preparations for use in veterinary office stock.

In this context, the AVMA needed to respond to the FDA’s call for comments by identifying medications that veterinarians actually need to have in-office to treat urgent and emergent situations. We intentionally narrowed our list to include only these most critical drugs, in order to maximize our ability to successfully shape what the FDA does. We purposely did not list all ingredients that veterinarians need to use in compounded preparations, because that was not needed. FDA’s draft guidance, if finalized, will allow veterinarians more flexibility to prescribe and prepare compounded medications for patients. No list will be required for patient-specific prescriptions.

That’s why we’re working toward passage of meaningful legislation that would legalize veterinary compounding from bulk ingredients. Our Task Force on Veterinary Compounding Legislation is charged with developing a legislative proposal consistent with the AVMA’s policies on compounding, and is expected to send recommendations to the AVMA Board of Directors in the first half of 2016.

Watch the video below to hear how AVMA identified bulk drug substances to submit to the FDA, as well as an update on the task force’s work, from one of its members, Dr. Colleen Currigan.