This February, nearly 80 women will embark on a voyage to Antarctica as part of a program that brings together women with scientific backgrounds from around the globe, with a focus on developing their leadership and strategic skills. The AVMA is thrilled to be following two of our members as they join this exciting adventure. 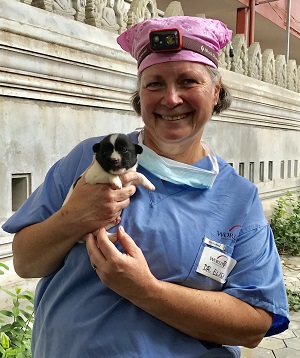 Dr. Elisa Harvey developed a strong passion for One Health during her travels and international volunteer experiences.[/caption]

Drs. Elisa Harvey and Jill Lynn are among only four veterinarians worldwide---two from Australia and two from the United States---who were selected to take part in the second expedition organized by the Homeward Bound program.  After nearly a year of preparation and education, they and their colleagues from around the world are preparing to board a ship headed for Antarctica.

Dr. Harvey, a 1992 veterinary graduate of Tufts University, is a practicing veterinarian and biotech consultant from Maryland who is passionate about improving human, animal and environmental health. Her varied career has included practice, regulatory work with the U.S. Food and Drug Administration, and private-sector biotech consulting, and she’s no stranger to international work. During her travels, she developed a strong passion for One Health, which is one of the reasons she applied for the Homeward Bound program.

“One Health started to just really resonate for me, and this tapped into that,” she said. “I believe in One Health, and the planet is part of that. It’s all intertwined.” 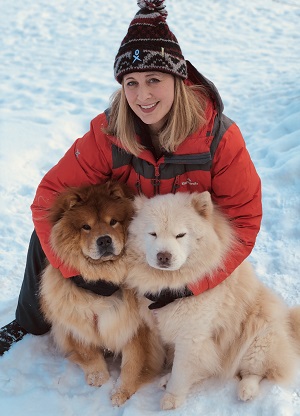 Dr. Jill Lynn owns and operates a mobile veterinary clinic and also serves as a captain in the U.S. Army Reserve Veterinary Corps.[/caption]

Dr. Lynn, who received her DVM from Michigan State in 2008, owns and operates a mobile veterinary clinic in Sault Sainte Marie, Mich., and also serves as a captain in the U.S. Army Reserve Veterinary Corps. Like Dr. Harvey, Dr. Lynn’s work has taken her outside the country to advance animal health.

After closely following the first Homeward Bound cohort, she knew the experience was right for her and began the rigorous application process.

“It looked like a wonderful opportunity to collaborate and work with other women. Obviously, adventure is a big and exciting part of this, but it also has to do with leadership training, strategic capability, collaboration,” said Dr. Lynn.

“There’s a lot of important work leading up to this experience. We’re ready to see what we can all do in our own way. The trip is just the beginning of the process," she said.

March 8, 2018 - More than half-way through their journey, the team starts the trip home from Antarctica

The expeditioners have passed the halfway point in their journey and are now officially headed home from the Antarctic Peninsula. They stopped earlier this week at the Rothera Research Station, a British Antarctic Survey base that is only visited by two tourist ships each year. Ice and bad seas threatened to prevent the visit, but the voyagers had some good luck and were able to make landing. The women are now making their way back up the peninsula and are expected to enter the infamous Drake Passage on Friday.

While on board ship, the group participated in what Homeward Bound officials termed the “world’s largest all-women’s gender forum,” discussing problems that face women in leadership globally. Over three days, they created a list of actionable commitments they hope will create global change around gender bias.

Prior to that, over the weekend, the group went on a cruise to learn about icebergs, only to have the session turn into a whale-watching session. A pod of up to 20 killer whales swam close by, allowing the expeditioners to view them for nearly half an hour.

Homeward Bound officials are posting frequent updates from the mission on the group’s Facebook page.

February 20, 2018 – The team continues preparing in Ushuaia before setting out for Antarctica

The sun rises on Ushuaia, Argentina.[/caption]

Drs. Harvey and Lynn joined the entire Homeward Bound team in Ushuaia, Argentina, for two and a half days of content sessions designed to further prepare them for the leadership journey onboard the ship that will take them to Antarctica. The team participated in skill-building exercises, covering topics in leadership development, strategic capability, and science communication before they’re at sea.

They were getting to know not only their colleagues but also themselves. In one six-hour session, they learned how to build a strategy map that includes three categories: relationships, self, and work.

“We are highly driven women who in some cases put work first, and we have been learning ways to make sure we take care of our relationships and ourselves,” said Dr. Lynn. “In veterinary medicine, wellness is a hot topic, and we are learning techniques we hope to share to help others in our profession.  We also spent time learning about ways to increase visibility on the issues we care about once we return home.”

“We feel we have already made many friends and have a new network of colleagues from all over the world,” said Dr. Harvey. “We have commented, ‘If only people all over the world could treat each other in such a welcoming and kind way, the world would be a different place!’” 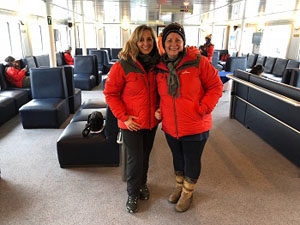 AVMA member veterinarians Dr. Jill Lynn (left) and Dr. Elisa Harvey (right) pose on board the ship that will take them to Antarctica.[/caption]

Of course, both veterinarians are looking forward to seeing Antarctic wildlife such as whales, penguins, and seals, as well as setting foot on the frozen continent and viewing the spectacular scenery. The team also expects to visit many countries’ research stations along the way.

“Our expedition leader is the famous Greg Mortimer, who has led more than 80 expeditions to Antarctica since 1990, and was the first of two Australians to climb Mt. Everest without oxygen and take a new route,” said Dr. Harvey. Mortimer is one of the many unpaid faculty members volunteering their time and expertise to make this program a success.

Once in Antarctica, the expedition’s team members will continue learning leadership skills through lectures, exercises, personal coaching and extensive open discussion, and also will collaborate on projects tuned to their scientific interests. Each day, the participants will have about four hours of content sessions in addition to time for shore landings to explore Antarctica. The team has been divided into groups to prepare scientific presentations and on-board seminars during their “Symposium at Sea.” They also will be developing their aforementioned strategy maps with the help of their peers and coaches, and work on their visibility plans for science communications.

As Dr. Lynn said: “We’re ready to see what we can all do in our own way. The trip is just the beginning of the process.”

We can’t wait to share the projects worked on by Drs. Harvey and Lynn, and hear about the impact of the voyage!

After months of preparation and days of packing, Drs. Harvey and Lynn arrived Tuesday in Buenos Aires, Argentina, their last stop before Ushuaia, the Argentinian town where they’ll board the ship that will carry them to Antarctica.

Many of their other team members also spent a night or two in Buenos Aires before heading to Ushuaia. Though the 78 women taking part in this expedition have been conversing and preparing alongside each other for the past 12 months, this was the first time that many of them met in person. A large group gathered for dinner on their first night in Buenos Aires, and the participants greeted each other with hugs.

Drs. Harvey and Lynn take a photo together after meeting up in Buenos Aires, Argentina.[/caption]

“After months of seeing each other on Zoom video calls and social media, it was great to finally meet participants in person as we all share a common interest in adventure, leadership development, learning more on how we can care for ourselves, and concern for our planet,” said Dr. Lynn.

“As veterinarians, we understand that human, animal and planet health are all intertwined, and we all felt we had the support of each other to make a difference in our world. It is amazing to have women from all over the world for collaboration.  We immediately felt a kinship with our fellow scientists and we were all very eager to hear and share our stories,” said Dr. Harvey.

Stay tuned to hear about their time in Ushuaia!

When do cats and dogs need antibiotics?

Making it easier to talk about the COVID-19 vaccine