Life on a farm has changed over the last several decades. When I was young, farm life created a community where every member had a role and every member was cared for throughout their normal life. But as time progressed, changes occurred. The community became more like a workforce, and everyone had to pull their own weight or be abandoned.

This reality was driven home the day I took my wife’s favorite cow to the sale barn. Elsie was 14, and during the pregnancy exam she came up open. After 12 successfully produced calves from artificial insemination, she had run out of gas. Elsie was a special cow, because she was a difficult calf that required extra care from birth to 3 months of age. She was bottle-fed at times, and my wife and kids loved that chore. As a young calf, she would frolic with the kids and often sneak up and nose my wife. Over the years the family and Elsie became good friends, and she was always the first to come to collect the treats that we would prepare for her. She was also the herd matriarch. This made moving the herd easy, as she was always willing to follow our directions. 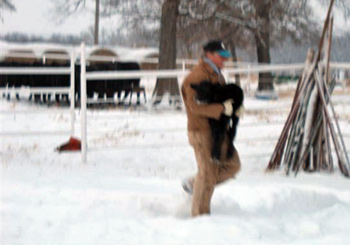 Mike Dicks carrying a newborn calf during the brutal winter of 2011. "Fifth calf in a frigid morning, a large calf from a heifer; she needed a little help getting going."[/caption]

Running the farm during the last decade became an ordeal.  During repeated droughts we had to come up with a “hit list” of which cows would be first to the sale barn when grass and/or water got to a certain point in the year.  Many times we were days from executing the hit list.  As a result, we became hardened to the need to cull cows that were less productive to ensure that those that were superior would not have to head to the sale barn at the next crisis.

To make matters worse, as a university professor I didn’t need to make money from the farm. But I had made a commitment to myself and the family when we began that I would not sacrifice our family to subsidize the American consumer. If the farm couldn’t survive on its own, there was no point in having it. The other side to that was I didn’t need to make enough profit on the farm to live, just enough to pay wages, maintain buildings and equipment, and improve the land. But the bottom line was, with a drought, high feed prices and low cattle prices, we simply could not afford to pay Elsie’s feed bill for a year with no revenue from her.

On her blog, Diary of a Real-life Veterinarian, Krista Magnifico writes, “There is no doubt that compassion fatigue exists, that there is an over-represented number of suicides in our profession, but there is a reason for these, a deep cumulative reason. A small incessant chipping away of the soul of the people we wanted to be, thought we were, and make excuses as to why we have become who we are.” This paragraph is from her story, Taking a Stand and Facing Consequences, about the decision she made not to follow her client’s wish to euthanize a pet that had other options. A client’s decision made based on economics rather than matters of the heart.

Krista’s story hit hard and brought to mind the accumulative farm and development experiences of a lifetime. Years of working overseas in underdeveloped countries in situations where children died because of economic decisions. Years of farm decisions that ended the lives of animals. Years with the knowledge that both were occurring regularly, every day, all over the world, and I became a part of it.  A deep cumulative reason.

Many farm kids make that first economic decision at the end of their first livestock show when the animal that they had spent so many hours training, working with, and loving has to be sold and delivered. What happens when such a decision is made for the first time in a professional setting under the scrutiny of clients and employer?

Economics isn’t a decision, and is rarely the only information needed to make a decision. What economics provides is a set of concepts to allow problems to be compared with consistency. It provides one piece of information about value—the value that is tangible and determined in the marketplace, representing the average value of buyers and sellers. Just as you may not want to buy a Mercedes because the price is greater than the value you place on the car, every decision we make uses measures of tangible and intangible benefits and costs.

Keeping Elsie inevitably meant another animal would have to go. There is only so much feed and water on the farm, and thus only so many animals can live there. The net tangible benefits (feed and care costs with no revenue) outweighed the net intangible benefits (e.g., the value of her greeting you in the pasture). These decisions played out hundreds of times on each farm and for every person that has ever partnered with an animal. Difficult choices based on each individual’s values.

Every decision to weigh tangible benefits above intangibles in deciding the fate of animals (human or otherwise) has caused a small incessant chipping away of the soul. A reason to discount hope. A deep cumulative reason. Very important words to ponder.