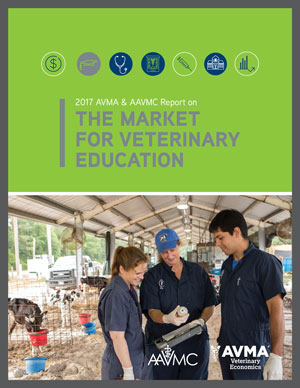 The average DVM degree debt for veterinary students has been increasing by approximately $5,400 per year for the last 16 years, but was much lower last year, rising just $1,363 between 2015 and 2016, according to the newly-released 2017 AVMA & AAVMC Report on the Market for Veterinary Education.

The new report is now available free of charge to all AVMA members and Student AVMA (SAVMA) members. It’s the second report in the four-part Veterinary Economic Report Subscription series, which is available for purchase by all interested parties but provided to AVMA and SAVMA members as a downloadable PDF.

The new report also offers other key findings related to the economics of veterinary education. Among these:

We encourage all AVMA and SAVMA members to download and read their free copy of this report, as well as the 2017 AVMA Report on Veterinary Markets, released in April.  The remaining reports in the series –examining the markets for veterinarians and veterinary services – will be released later this year.