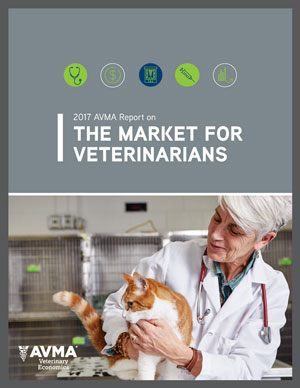 The newly-released 2017 AVMA Report on the Market for Veterinarians observes an increasingly healthy market for veterinary employment, noting more job postings on the AVMA Career Center, among other indicators.

The report warns, however, that the profession still faces considerable maldistribution problems – both between states and regions, and within states and metropolitan centers.

The new report is available for download free of charge to all AVMA members and also can be purchased as part of the four-report Veterinary Economic Report Subscription series in the AVMA's online store.

In addition to presenting a picture of the profession based on a range of demographics, the report declares the national market for veterinarians to be robust for two years running, citing growth in the U.S. economy as the primary contributor to this improvement.

The report offers a variety of study data and analysis, including these findings:

In addition to analyzing factors describing the internal function of the market for veterinarians, the report includes discussion of a veterinary market key performance indicator, the Net Present Value of the DVM degree, or the difference between the return and total investment over the lifetime of veterinary work.

We encourage all AVMA members to download and read their free copy of this report, as well as the 2017 AVMA Report on Veterinary Markets, and the 2017 AVMA & AAVMC Report on the Market for Veterinary Education, both released earlier this year. The remaining report in the series – examining the market for veterinary services – will be released later in the year.