A look back at the first session of the 114th Congress 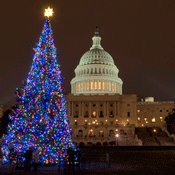 This year, Congress has been dealing with some pretty tough issues, from the threat of ISIS to gun control and battling avian flu. Though our issues have not always been front-and-center, the AVMA Governmental Relations Division (GRD) has been steadily working to protect and promote the veterinary profession on Capitol Hill.

The AVMA was pleased to see a few key pieces of legislation important to the profession introduced once again this session, including: the Veterinary Medicine Loan Repayment Program (VMLRP) Enhancement Act (S. 440/ H.R. 3095), which would remove a steep withholding tax on the VMLRP, ensuring that all of America’s rural communities get access to the veterinary care they desperately need; and the Prevent All Soring Tactics (PAST) Act (S. 1121/ H.R. 3268), which would protect horses from the abusive act of soring. The GRD staff worked diligently to garner support for these bills and continued its fight for funding for key federal programs that are important to veterinary medicine during the congressional appropriations and budget processes.

At the request of our members, the AVMA decided to dedicate more time and resources to advocating for several bills that would improve the terms and conditions for veterinary students loans, including: the Student Loan Interest Deduction Act (H.R. 509), which would expand the student loan interest deduction for students; the Student Loan Refinancing Act (H.R. 649), which would remove current restrictions on refinancing student loans whenever borrowing rates are reduced; and the Eliminating the Hidden Student Loan Tax Act (H.R. 1285), which would end the practice of charging origination fees on all Direct Loans for undergraduate and graduate students. As Congress looks to reauthorize the Higher Education Act—the bill that funds most student loan programs—the AVMA will continue to advocate for the needs and concerns of the veterinary profession.

Of note, the Association also took supportive positions on a few new bills that would protect animal health and welfare, including: the Pet and Women Safety Act (H.R. 1258/S. 1559), which would help victims of domestic violence or stalking and their pets; and the Preventing Animal Cruelty and Torture (PACT) Act (H.R. 2293/S. 1831), which would amend the federal criminal code to prohibit the barbaric act of animal crushing.

Unfortunately, a few bills that we oppose reared their ugly heads again this year, and the GRD worked to educate lawmakers on how these bills would negatively impact our members. These bills include: the so-called Fairness to Pet Owners Act (S. 1200/H.R. 3174), which was reintroduced in late spring and would place a sweeping prescription mandate on veterinarians; the Horse Protection Amendments Act (S. 1161/H.R. 4105), which was introduced as an “alternative” to the PAST Act and would do nothing to improve the structure within the walking horse show industry that continues to allow sored horses to slip between the cracks; and the Preservation of Antibiotics for Medical Treatment Act (PAMTA) (H.R. 1552), which would limit the uses of medically important antimicrobials for use in food animals.

As you can see, the AVMA was quite active advocating for our members on Capitol Hill. Some of our work, however, extended beyond the Hill. The AVMA directly supported some of the federal efforts by the White House to curb and study antibiotic use and resistance, and on the Food and Drug Administration’s call for feedback on its draft guidance on animal compounding and its bulk drug substances list. AVMA’s Task Force on Veterinary Compounding Legislation met twice at AVMA’s D.C. office as they continue to work on a legislative solution that would help veterinarians and pharmacists compound needed preparations in accordance with federal laws.

In March, the AVMA GRD held its annual legislative fly-in, where nearly 70 veterinary students came to the nation’s capital to learn about public policy and the legislative process and advocate for their profession. The division also hosted 10 governmental relations student externs throughout the year at the D.C. office and selected three congressional fellows to participate in the AVMA Congressional Fellowship Program for 2015-2016.

Our advocacy efforts would not be complete without the help of YOU—our members! Thanks to your support, our AVMA Congressional Advocacy Network (AVMA-CAN) now has more than 30,000 advocates who have sent approximately 30,276 letters to members of Congress this year. Thank you for your efforts, because our voice is stronger with yours!

As we look ahead, we know that things will be quiet next year given the 2016 presidential election, but this does not mean that our advocacy work is done. Our members will play a key role in meeting with their members of Congress as they campaign back in their home districts, letting them know the important issues impacting the veterinary profession and animal health and welfare. Be sure to sign up for our monthly newsletter, The AVMA Advocate, where you will always have the latest information on legislative and regulatory developments happening in Washington.

The AVMA GRD would like to wish you all a safe and happy holiday.