JAVMA celebrates 100 years as the voice of the veterinary profession 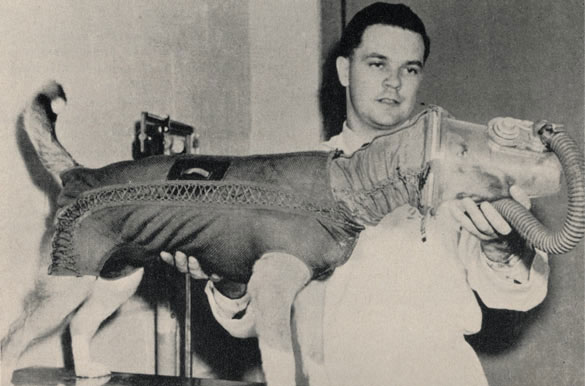 This photo appeared on the cover of the March 1, 1960, issue of JAVMA. It shows Capt. Keith Kraner, a veterinarian, holding a dog wearing a pressure suit and oxygen helmet in connection with research related to space exploration.[/caption]

For 100 years, the Journal of the American Veterinary Medical Association (JAVMA) has served as the voice of the profession by providing reports of clinical research, feature articles, and regular columns of interest to veterinarians in private and public practice. To commemorate this important milestone, JAVMA is devoting its Oct. 1 and Oct. 15 issues to its 100th anniversary, with the Oct. 1 issue focusing on its coverage of veterinary news and the Oct. 15 issue including more about the scientific side of the Journal. Both issues will feature a recap of all 10 decades and a photo spread. 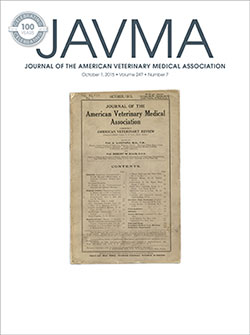 “JAVMA has been an integral part of the AVMA for the past 100 years, documenting the progress and achievements not just of the association, but also of the veterinary profession as a whole,” said JAVMA Editor-in-Chief Dr. Kurt Matushek. “From its inception, the Journal has focused on the most important scientific advances of the day, ranging from hog cholera, tuberculosis, and infectious abortion in the early years to injection-site sarcomas, newer anesthetics, and advanced imaging today. At the same time, JAVMA has helped to promote a sense of community within the profession.”

JAVMA has earned its reputation as the premier, peer-reviewed veterinary journal internationally.

“JAVMA has such a rich history of serving the profession and promoting improved quality care of animals while also being the news source for key activities within the profession,” said AVMA President Dr. Joe Kinnarney. “For many of our members, when they think about AVMA, the first thing that comes to mind is JAVMA.”

JAVMA has had a long and celebrated history. The publication was founded by the AVMA (then, the United States Veterinary Medical Association) in 1877 under the name “American Veterinary Review,” but the Association soon relinquished ownership and management to the Review’s first editor, Dr. Alexandre Liautard. Subsequently, the AVMA purchased the rights to the AVR and changed the name to JAVMA, beginning with the October 1915 issue. The Journal’s early issues mainly consisted of material from the AVMA’s annual meeting. From the start, however, JAVMA also published obituaries, birth announcements, marriage announcements, information on practice transactions and sales, retirements, and other information meant to promote a sense of community. An actual “News” section first appeared in the July 1939 issue of JAVMA. Over time, this News section focused on stories related to AVMA activities and entities, the AVMA Annual Convention, veterinarians’ experiences, and current events affecting veterinary practice. The transition to desktop publishing in the mid-1990s improved the News section’s ability to deliver more stories in a more timely fashion, as production was brought in-house.

Today, JAVMA is the most widely read veterinary journal, reaching more than 80,000 subscribers and, in readership surveys, has consistently been recognized as the most authoritative. A 2012 readership survey showed that most AVMA members were regular readers of the Journal (i.e., reading at least three of every four issues) and that 95 percent of members at least skimmed every issue.

From all of us at the AVMA, happy anniversary, JAVMA. Here’s to 100 more successful years!

A year filled with challenge and opportunity