The AVMA House of Delegates (HOD) held its Winter Session on January 8-9 during the Veterinary Leadership Conference in Chicago. The District Caucuses, which are meetings of the HOD delegates with their respective Board of Directors district director, were held on January 8 for the purposes of information exchange. 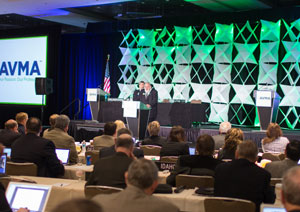 The Plenary Session and Informational Meeting provided updates to HOD delegates and other attendees regarding AVMA initiatives and programs, the strategic plan, Political Action Committee and Governmental Relations Division updates, updates on wellness and economic initiatives, and the treasurer’s report. The Association of American Veterinary Medical Colleges (AAVMC) was honored for its 50th anniversary. The AVMA Group Health and Life Insurance Trust (GHLIT) unveiled its new name and look as AVMA Life.

During an open forum discussion, HOD delegates voiced feedback on the timing of materials provided for their review; the schedule of the Veterinary Leadership Conference; and their desire for additional scheduled time for open discussion of issues.

The HOD considered two resolutions during the meeting. Resolution 1-2016 addressed proposed revisions to the AVMA’s policy on free-roaming and abandoned feral cats. There was robust discussion in the reference committee and on the HOD floor. Five proposed amendments to the revised policy were made. Two of the amendments were approved by majority vote; one was considered outside the scope of the amendment process and the HOD voted not to consider it; and two others were defeated by majority vote. A proposal to refer the policy back to the Board of Directors with instructions to refer the policy back to the Animal Welfare Committee was also defeated, with 94.5% voting in opposition. The amended policy was approved by the HOD, with 94.2%% voting in favor. Background information and the policy as approved are available on a separate blog post.

Resolution 2-2016 was introduced by the House Advisory Committee based on ongoing discussions within the HOD regarding direct communication between HOD delegates and the AVMA members they represent. Because not all AVMA members are members of their state veterinary medical association (VMA), and vice versa, HOD delegates expressed concerns that they may not be reaching all AVMA members in their state when they use state VMA contacts. The HOD approved this resolution, with 99.7% in favor.

The AVMA Board of Directors (BOD) met on January 8; for a summary of that meeting, please refer to the separate wrap-up blog post. For more information about the BOD and HOD meetings, look for coverage in upcoming JAVMA News articles.

COVID-19: Answering the call together

Powered by you: AVMA members guide House of Delegates

Drs. Seyedmehdi Mobini and Sandy Willis elected to AVMA Board of Directors