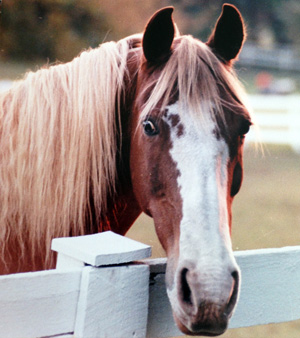 Take action now to support the USDA's proposed rule and tell them not to extend the comment period.

“CQ” was the horse of a lifetime, a gentle soul. The one horse that leaves his mark on you forever. The one you think of every day, even years after his death.

He was a Tennessee Walking Horse and he had the battle scars from soring, a cruel and inhumane practice performed to exaggerate a horse’s gait. His pasterns were scarred, the hair on his cannons was permanently curled and thick from irritation, and it was a regular struggle to control his chronic laminitis and the recurrent hoof abscesses it caused. He’d been trained to hide his pain, making it harder to recognize and treat his problems. I didn’t know anything about his show history, but he’d obviously outlived his usefulness to the ones who’d sored him or he wouldn’t have been passed through a succession of owners until he found his forever home with me.

Why had this been done to him? For no reason other than so he’d win ribbons in the show ring.

For more than 40 years, soring has been illegal. Yet it continues, largely because the industry itself has been allowed to be its own watchdog and has continually developed new ways to evade detection of these cruel practices. Recent legislative attempts, such as the PAST Act (H.R. 3268/ S. 1121), have been stalled repeatedly by political pressures placed by the “Big Lick” industry on members of Congress.

The AVMA has advocated for the PAST Act, but has also been in communication with the U.S. Department of Agriculture Animal and Plant Health Inspection Service (USDA-APHIS) to urge regulatory changes to once and for all eliminate soring. We’re pleased that USDA recently announced the proposed changes to the Horse Protection Act. The proposed rule makes two significant changes:

It’s too late to spare CQ the pain of soring, but it’s not too late to help the next generations of gaited horses to live, train and show free of pain from soring. Please show your support for the horses by commenting in support of the USDA-APHIS proposed rule.

The USDA is being pressured to extend the comment period on the proposed revisions to the Horse Protection Act. This is just a ploy to further delay the process and to allow the cruel practice of soring to continue. Forty years is more than long enough, and the industry has proven time and again that it won’t eliminate soring. It’s time to stop this cruelty: comment in support of the USDA’s proposed changes, and tell them there’s no need for an extension!