Editor’s note: This post was authored jointly by the AVMA and the American Association of Bovine Practitioners. 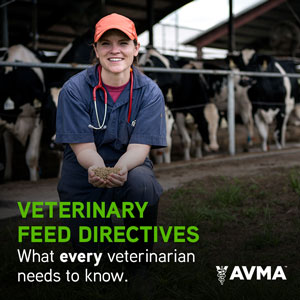 Since the VFD (Veterinary Feed Directive) rules went into effect, veterinarians are now becoming more aware of how medicated feeds are being used on their clients’ operations.  Unfortunately, veterinarians may be asked in some instances to write VFDs that violate the rules. That would be an unfortunate development, and one that would put veterinarians in a difficult position.

The AVMA and American Association of Bovine Practitioners (AABP) have learned of allegations that some veterinarians are being pressured to issue VFDs for uses of chlortetracycline that are not permitted under the VFD rules. We encourage all of our members to educate themselves on the proper use of VFDs, and to work with clients, producers and feed mills to ensure that everyone is following the Veterinary Feed Directive rules.

Proper and improper uses of chlortetracycline

One of the uses of medicated feeds is the addition of antibiotics, specifically chlortetracycline, to mineral feed.  Extralabel use of medicated feeds has been prohibited since AMDUCA was passed in 1994.  Veterinarians might be asked to issue a VFD for chlortetracycline for indications not on the label, such as pinkeye or foot rot.  However, both of these uses are illegal.

Another common question in issuing VFDs for medicated mineral feed is determining whether the feed is a “free choice” or a “hand fed” feed.  “Hand fed” feeds are fed to animals every day.  This designation is added to the label when there is a concern for adverse drug reactions; the animals are fed daily in order for them to be observed daily.  A “free choice” feed does not have such a requirement.  However, feed – including mineral feed – can only be labeled as free choice when both the drug label and the feed formulation have been approved for this indication by the FDA.

For a free choice feed, the intake of the drug (i.e., the dose) is determined by the feed ingredients, the formulation of those ingredients, and the concentration of the drug.  Therefore, the specific formulation must also be approved by the FDA.  Currently, there is only one indication for chlortetracycline in free choice feeds, and that is for control of active anaplasmosis.

According to the AABP, as of March 2017, there are only five free choice feed formulations approved to be used for the above chlortetracycline drug approval:

Why is this important to veterinarians now that the VFD rules are in effect?  In the past, some feed mills formulated proprietary custom mineral feeds and offered them for use free choice even if they did not follow one of the above free choice feed approval formulations.  In other words, some feed mills and customers were using their own mineral formulation mix, adding chlortetracycline, and then feeding it as a free choice mineral feed.  Since the formulation was not approved by the FDA, the intake level and dose would be unknown; therefore this would be an illegal use.  To date, no regulatory enforcement has occurred as a result of this activity; however, veterinarians who are asked to write VFDs for these mineral mixes that are clearly being used as free choice feeds are placed in a difficult position because this is not allowed under the VFD rules. Writing such VFDs is illegal, and veterinarians should not provide them.

Educational resources that clearly explain the ins and outs of VFDs are available from the AVMA and its allied veterinary organizations, and we encourage our members to utilize them to ensure they understand their legal obligations.  Finally, veterinarians should talk with their producers and feed mills about the legal and illegal uses of medicated feeds so that everyone is familiar and stays in compliance with the VFD regulations.