Thanks to great member interest and your extensive input, the AVMA House of Delegates (HOD) conducted a successful, first-ever Veterinary Information Forum (VIF) during its regular summer meeting during the AVMA Annual Convention in San Antonio, Aug. 6-9. 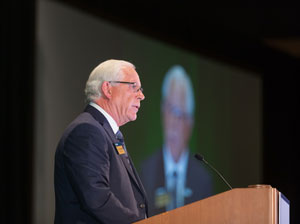 Dr. Tom Meyer addresses the HOD Friday prior to his installation Tuesday as the 2016-2017 AVMA president. Dr. Meyer cited cooperation and collaboration among all AVMA volunteer entities as a key to effectively advancing the profession’s shared interests, values and goals.[/caption]

The HOD-wide forum provided an opportunity for open discussion of issues brought forth by the delegates and their constituents. Through outreach to AVMA members, the HOD was able to assess which topics deserved discussion during the forum so that ideas could be shared and rapid response provided to the issues if needed.

The three topics that rose to the top and were discussed during the VIF were cyberbullying, student debt and AVMA efforts to support large-animal veterinarians. After extensive discussion of each topic on the House floor, the topics were referred to HOD Reference Committees, where more in-depth discussion occurred and where recommendations were formulated and then presented to the full House later in the day.

The topic of cyberbullying resulted in an approved recommendation calling for the AVMA Board of Directors to elevate cyberbullying on its priority list with specific emphasis on continuing education, member awareness, crisis management and collaboration with PLIT on reputation management tools. The recommendation also asks the Board to consider as an option a hot line or rapid telephone support for veterinarians experiencing cyberbullying. The AVMA has online resources to help members manage their online reputation and mitigate cyberbullying, and the Board and staff will discuss additional efforts to assist members.

The student debt issue discussions resulted in a successful recommendation vote on a proposal calling for the HOD members to support the recommendations of the recently held Economics of Veterinary Education Summit and urged every House member to disseminate the information on the summit to their colleagues and constituents to raise awareness of the student debt issue.

In response to discussions held regarding AVMA efforts to support large-animal veterinarians, the House approved a recommendation calling for numerous action items, including:

The HOD elected Dr. Stacy Pritt to the office of AVMA vice president.[/caption]

The HOD asked AVMA staff and the Board to provide updates on each request for the 2017 House of Delegates Winter Session.

In other business, the HOD elected Dr. Stacy Pritt to the office of AVMA vice president. Dr. Pritt, who ran unopposed, is director of the institutional animal care and use committee in the Research Administration department at the University of Texas Southwestern Medical Center. The AVMA vice president serves a two-year term as the association’s liaison to the Student AVMA and student chapters, and is also a voting member of the AVMA Board.

Dr. Michael Topper, the immediate past chair of the HOD House Advisory Committee and a member of the HOD since 2008, was elected AVMA president-elect. Dr. Topper is a veteran of the U.S. Army Veterinary Corps, and he currently serves as director of clinical pathology and immunology for Merck Research Laboratories.

The HOD also elected individuals to AVMA council positions. The councils and those elected are: