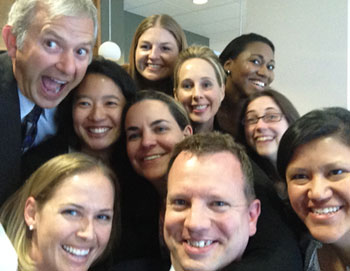 Calling all leaders! We need veterinarians emerging in their careers to get prepared to lead our profession, and we welcome nominations, including self-nominations, through February 15, 2016 for this exciting program.

Application requirements
Veterinarians don’t need to already be established leaders in organized veterinary medicine to serve as AVMA Future Leaders. If they’ve shown leadership involvement previously (for example, as a volunteer for a state VMA, as a SCAVMA officer in school, or a Veterinary Leadership Experience participant), are AVMA members, and are 15 years out of veterinary school or less (2001 or later), this program can help them blaze their leadership paths.

It’s all about the journey.
Future Leaders are active during their busy, fulfilling year and can expect to:
• Prepare communications (videos, quotes, public speaking) for use in promotional activities.
• Interact regularly with a veterinarian leader to advise them on increasing their leadership potential over the course of the year.
• Do a 360-degree assessment to find out their leadership strengths and opportunities.
• Set short- and long-term goals and work towards their achievement, interacting with High Impact Facilitation’s Dr. Ken Andrews, who generously donates his time to the program.
• Hear lectures on leadership, including lectures from veterinarian leaders who have blazed their own paths over their careers.
• Work within their 10-person team and with AVMA staff to manage and follow through a team project to prepare novel resources for AVMA members.

We look forward to your nominations!

Support for the AVMA Future Leaders Program is generously provided by Zoetis.

The AVMA and its Future Leaders also thank Dr. Ken Andrews for his generosity in donating his time to this program.

COVID-19: Answering the call together

Powered by you: AVMA members guide House of Delegates

Drs. Seyedmehdi Mobini and Sandy Willis elected to AVMA Board of Directors