Candidates sought for AVMA Board of Directors 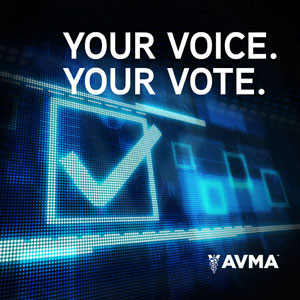 Calling all AVMA members from the following states – yours could be one of the next new faces on the AVMA Board of Directors:

Two positions will open up on the Board of Directors (BOD) in 2018, and your AVMA colleagues need dynamic, passionate members to step forward to fill them. If you live in one of the above states and are interested in working to improve veterinary medicine and the lives of your fellow AVMA members, we encourage you to stand for election to one of these seats.

Nominations are open for candidates for election to the Board of Directors representing District 7 and District 9, whose current directors’ terms will expire in 2018. District 7, currently represented on the BOD by Dr. John Howe, includes the states of Iowa, Minnesota, Missouri, Nebraska, North Dakota, and South Dakota. District 9, currently represented by the BOD chairman, Dr. Michael Whitehair, includes Arizona, Colorado, Kansas, New Mexico, Oklahoma, and Utah.

District directors serve six-year terms. Terms for the new directors sought for Districts 7 and 9 will begin during July 2018 and end in 2024.

Candidates must live in the district they seek to represent and must have been active members of the AVMA for at least five consecutive years immediately prior to the election. To become a candidate, you can either be nominated by the principal veterinary organization of a state within your district or you can file nominating petitions signed by 50 AVMA voting members residing within the district.

If you have a desire to advocate for the interests of your colleagues, and a passion to protect and advance veterinarians’ ability to provide crucial services, this is a unique opportunity that will let you make a real difference in the lives of veterinarians. Our Elections web page will guide you through the process of becoming a candidate and running for election. You’ll find rules and instructions, nomination forms, and even a primer on how the AVMA conducts electronic balloting.

Nominations for candidates for the District 7 and District 9 BOD positions are due Feb. 1, 2018. Members who live in each district will vote in the elections March 1-31, 2018.