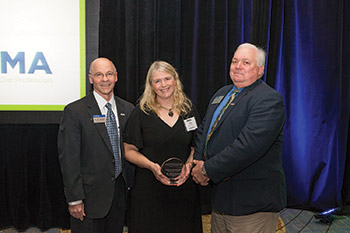 Dr. Melissa Bain, the 2016 Leo K. Bustad Companion Animal Veterinarian of the Year, says that educating students – and seeing them help educate clients – is her favorite part of her job.

“Teaching the veterinary students is the most rewarding thing, because not only do I help individual owners in the clinic but I’m able to show students the value of behavior and welfare so they can then educate their clients,” said Dr. Bain, the chief of service for the Clinical Behavior Service at the University of California–Davis School of Veterinary Medicine.

Sometimes, behavior problems lead to pets being euthanized. At UC-Davis, Dr. Bain said she and her students see some “very dangerous dogs,” but they work with clients to educate them to help them keep their pets in the home. Sometimes pets are given medication. After working on the pet’s behavior, the quality of life improves for both the owner and the pet, and Dr. Bain said she can see the change.

“I see the owners change the relationship with their pet to where they’re not stressed about behavior, and they’re not using punishment-based methods to change their dogs. They realize there’s another way to do these things,” she said.

One case that stands out happened when she was a resident. An owner brought her dog in for evaluation of aggression toward her four-year-old daughter, whom the dog had growled at a number of times. The parents, concerned for their child’s safety, decided to seek help.

“The parents had used a number of techniques that their trainer told them to use — choke collar, yelling, 'alpha roll'/pin to the ground. The dog was fearful of the girl, and now fearful of the owners,” Dr. Bain said. “We worked to give them different options of interacting with their dog, including stopping the punishment, utilizing positive reinforcement and desensitization and counterconditioning, and safety recommendations for their situation. The owners were very good in following the treatment recommendations and the dog improved.”

Dr. Bain hadn’t heard from the family for years, but a few years ago she received a card from them with a picture of the dog and the now-teenage daughter. The owner didn’t think Dr. Bain would remember them, but she did — and the owner said she saved the dog’s life.

“Their relationship had changed for the better, and the dog and their daughter had become best friends, as evidenced by the adorable picture,” Dr. Bain said. She has other stories of people and pets she has helped, “but this one still makes me stop and remember the good things that happen, especially on those days that I'm feeling a little down or discouraged.”

Building connections like this one with clients is important, especially in the behavior field, where sometimes clients are dealing with difficult situations. Connections to other veterinarians are also important, especially for mentoring and teaching. In working with her students and looking back on her own career, Dr. Bain acknowledges the value of mentorship in veterinary medicine — in fact, her own mentor nominated her for the Bustad Award, one of a wide range of Excellence in Veterinary Medicine Awards sponsored by the AVMA and American Veterinary Medical Foundation (AVMF) to promote the continuing advancement of the profession and to recognize and reward our profession’s leaders. The Bustad Award is co-sponsored by the AVMA, AVMF and Pet Partners.

“I was incredibly honored and excited to win, and to be nominated,” Dr. Bain said, “but the biggest part was that my mentor nominated me. That meant a lot.”

Dr. Bain’s mentor, Dr. Benjamin L. Hart, won the Bustad Award in 2013 and serves as Distinguished Professor Emeritus at the UC-Davis School of Veterinary Medicine. In his nomination letter, Dr. Hart wrote that Dr. Bain is an “unquestionable leader in integrating the essence of the field of human-animal interactions – in all its ramifications – with veterinary clinical behavior, animal welfare and the mental health of veterinarians.”

Dr. Hart’s mentorship was beneficial to Dr. Bain, and she recognizes the value of mentors in the profession, as well as the relationships veterinarians can build with their clients and patients. While the Bustad Award is given for work with companion animals, its philosophy goes beyond that, into equine, food animal, and laboratory medicine, Dr. Bain said – and also emphasizes important connections in veterinary medicine.

“It shows that veterinary medicine isn’t just about the medicine part,” she said. “It’s also about connection with owners and the public as well.”

Veterinary research spotlighted on the Hill