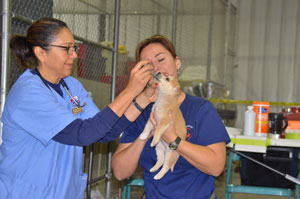 month later, Dr. Tolani Francisco still gets emotional thinking about the impact of the Reaching UP program on the Pueblo of Laguna.

“The reception brings tears to my eyes, how these people were so receptive to the help we provided to their animals,” said Dr. Francisco, a member of the Pueblo of Laguna and the second female Native veterinarian ever in the U.S.

Reaching UP, funded by the American Veterinary Medical Foundation (AVMF) and coordinated by staff within AVMA’s Animal Welfare Division, has provided high-quality, high-volume spay/neuter and preventive care to underserved populations. In November, the AVMA and AVMF partnered with the Native America Humane Society and Forming Positive Links Committee to bring the Reaching UP program to New Mexico.

Dr. Francisco, who has belonged to the AVMA for 26 years, serves as director of veterinary services and public health at the Native America Humane Society and works for the USDA APHIS Veterinary Services as a district epidemiology officer in Colorado. As a member of the Pueblo of Laguna, she had a special connection to the Reaching UP program.

“My passion – one of my lifelong ambitions – has been to provide not just adequate but superior veterinary care to tribal animals,” Dr. Francisco said.

After graduating from veterinary school in 1990, she realized how expensive it was to open a veterinary practice, so she pursued other paths in veterinary medicine. Reaching UP gave her an opportunity to fulfill her lifelong goal: “to provide high-quality veterinary care to an underserved area – which, in this case, was my reservation.”

Tribal members do the best they can to care for their animals, Dr. Francisco said, but they often don’t have the financial means to provide regular veterinary care. When discussing the possibility of bringing the pilot program to the reservation, she told the tribal council that veterinary medicine’s standard of care is set by the AVMA – and the tribe’s agreement to participate was due to the AVMA’s involvement and dedication to a high level of care.

“So often, Native people are used to getting second-best, or getting leftovers,” Dr. Francisco said. “People appreciated that we said, ‘You’re going to get first-rate care. You won’t get anything different from what you’d get in downtown Albuquerque. You’re not getting the leftovers – you’re getting top quality.’”

Dr. Francisco said the community also could feel the compassion in the Reaching UP program, starting with a daily prayer offered in their native language by her father, a tribal elder. He prayed for the veterinarians and everyone working with the animals, as well as the animals themselves, letting them know that all of the procedures were being done with love and respect. She said from the very start, people appreciated that Reaching UP offered a positive experience.

“People liked that we didn’t look down on them because they’re maybe not able to provide the care people in a more urban area can. We were very respectful about how their animals were cared for and tried to work with them on the quality of care they could provide [in the future] with the financial and physical means they had,” Dr. Francisco said.

Over the course of four days, veterinarians performed 125 spay/neuter surgeries and an additional 75 animals received wellness exams, vaccinations, and wound and chronic injury care. Dr. Francisco said she’s still hearing daily from people on the reservation about how much they appreciated Reaching UP. Her parents tell her that people approach them in the grocery store to talk about the pilot program and say they’d love to be involved in another one.

“The majority of my career has taken me away from the reservation, but I had so many people come up to me to say thank you and give me a hug,” she said. “This has been needed for so long. There were tears that were shed because people were just so thankful we could do something on such a large scale.”

You can view photos from the Reaching UP clinic on the AVMA's Facebook page.

Veterinary research spotlighted on the Hill