2016 Report on the Market for Veterinarians now available

The AVMA today released the 2016 Report on the Market for Veterinarians, making it available for free download by all AVMA members as part of the AVMA’s 2016 Economic Reports series. 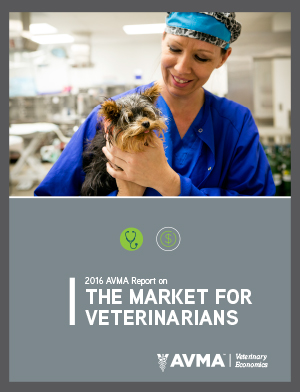 The 2016 Report on the Market for Veterinarians makes use of data from a variety of sources.  Subjects addressed in the report include veterinary employment, unemployment and underemployment; income and the net present value of the veterinary degree; and veterinary well-being as it relates to debt load, job and career satisfaction, income, expenditure patterns, burnout scores and a veterinarian’s physical health.

Key findings of the report include:

Finally, the report illustrates a new research thrust of AVMA’s Veterinary Economics Division to begin to look more closely at the potential differences in local compared to national market conditions.  This report provides results of an analysis of veterinarians in the state of Indiana, and next year we will provide the results for Arizona, Colorado, Texas, bovine practices, equine practices and a segment of specialists, the lab animal practitioners. Workforce characteristics in Indiana and the U.S. are compared in this year’s report, and the value of the veterinary services sector to the Indiana economy is computed.

The AVMA’s economic reports provide the most current and vitally important veterinary economics information to veterinarians and others with a stake in the veterinary profession’s success. Prepared by the economists in the AVMA’s Veterinary Economics Division, the reports include the research performed by division staff as well as research from more than a dozen outside sources. The reports explore the many facets of veterinary economics and can help veterinarians better understand the markets they operate in and the factors that affect their livelihood. They are must-reads for anyone invested in the profession.

Our final report in the 2016 series will address the market for veterinary services. As with the first three reports, the final report will be made available to all AVMA members free of charge.

New economic webinars help you and your practice thrive