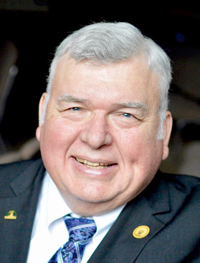 “Those to whom much is given, much is expected.”
- paraphrased from Luke 12:48

Dr. Ronald E. Gill focuses on this phrase not because he was born with a silver spoon in his mouth, but because he was given an excellent formal education and has had a wonderful career in a profession that he has thoroughly enjoyed. Dr. Gill believes it is important for him to give back to the profession.

Dr. Gill grew up on a small farm in Southeastern Illinois, the same farm where he and his wife of 45 years now live. He grew up with a menagerie of farm animals including beef cattle, hogs, sheep, goats, horses, as well as the typical farm dogs and cats. He worked alongside his father and grandfather baling hay on hot dusty days, feeding cattle in the winter and cleaning manure with a pitchfork from an early age. Not something he always enjoyed, he admits, but as he looks back it was a wonderful learning experience.

As Dr. Gill grew older, it became obvious that the family farm was not large enough to support himself and his future family. By the age of 12 he had developed an interest in animals, science and working outside, so veterinary medicine seemed to be a logical choice. He looked forward to the visits of the local veterinarian, Dr. Leroy Biehl, to the family farm. Dr. Biehl later taught for many years at the University Of Illinois, College of Veterinary Medicine. Getting the opportunity to job shadow Dr. Biehl helped the future Dr. Gill decide to pursue a career in veterinary medicine.

There were only 18 veterinary schools in the U.S. when the future Dr. Gill graduated high school, and the University of Illinois was one of them. Admission to the College of Veterinary Medicine at the University of Illinois became a goal. He completed the undergraduate requirements for admission to the College of Veterinary Medicine in 2 years. Once in veterinary school, he participated in many intramural sports and veterinary club activities while maintaining a grade point average allowing for his induction into Phi Zeta. With those goals reached he set an additional goal of owning a part of a practice one year after graduation and that was achieved as well.

Dr. Gill married his high school sweetheart, Terry, who supported him by teaching during the final three years of his veterinary education. The couple have been blessed to have four beautiful daughters who, along with their families, love to spend time with them and each other as a family. Traveling to watch their girls in all of their sports, scholastic and musical events while running a veterinary practice has been replaced by traveling to visit children and watching the grandchildren in their many activities. Dr. and Mrs. Gill now have a total of nine grandchildren with the 10th due in January 2017.

Dr. Gill’s involvement in organized veterinary medicine began at the local regional level, the Southern Illinois Veterinary Medical Association (SIVMA), and later representing the SIVMA at the Illinois State Veterinary Medical Association (ISVMA).  He served in various leadership roles culminating in the presidency of the ISVMA. Dr. Gill has served on multiple entities within the AVMA including chairing the Council on Veterinary Services for two years and the Governance Performance Review Committee for two years. He was also the vice-chair of the Council on Education. Dr. Gill feels he has always received tremendous advice and support as he advanced through his professional career from veterinary colleagues who have also contributed countless hours of their time to the betterment of the profession.

Dr. Gill believes involvement in leadership positions in the community is also very important. He has served on the county school board, Farm Bureau Foundation Board and at his church.

Dr. Gill loves the work he does. For over 41 years, he has interacted with patients and their owners. His entire career has been spent in rural mixed animal practices. He has worked hard to develop relationships with his clients, their families and their animals. He looks back over his career and is humbled that he has had the opportunity to serve as many as four generations of some families, building personal relationships with his clients while treating their animals.

Biographical statement provided by the candidate.