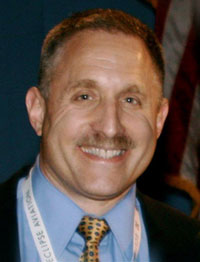 Candidate for District I Director,
AVMA Board of Directors

Dr. Arnold “Arnie” Goldman is a graduate of the University of Florida College of Veterinary Medicine and University of Minnesota School of Public Health, where he earned a Master of Public Health degree in 2011. Arnie has owned and operated Canton Animal Hospital in Canton, CT since 1995.

Arnie has been active in veterinary medical association leadership for almost two decades. He has served in many positions on the board of directors of the Connecticut Veterinary Medical Association (CVMA) including a term as president, as chair and current co-chair of their government affairs committee, ethics/grievance committee, disaster preparedness committee and on their diversity committee. He founded the Connecticut State Animal Response Team (CTSART) within CVMA, writing four successful AVMF preparedness grant applications.

He later founded the Connecticut Veterinary Medical Foundation (CVMF), as the charitable and service arm of CVMA, and innovated many of its programs. CVMF hosts public health programs, including CTSART and Companions-in-Crisis, aimed at a domestic violence mitigation.

Arnie has served on the board as president of the New England VMA, and was founding president of NASAAEP, the National Alliance of State Animal & Agricultural Programs. He was the founding board member for veterinary medicine for HAVEN, the Connecticut impaired health professionals recovery program.

Arnie is the Connecticut delegate to the AVMA House of Delegates and chaired its subcommittee on term limits in 2015. He is a member of AVMA’s Governance Performance Review and State Advocacy Committees and participated in its Compass Mentoring Program in 2013. Collaborating with a colleague, Arnie wrote a successful AVMF Oath-in-Action grant for Connecticut’s Big Fix 2015, which enabled veterinary care delivery to an underserved community’s people and animals.

Earlier in his career, Arnie lived and practiced in Massachusetts, Rhode Island and New York, and as a relief veterinarian in Maine, New Hampshire and New Jersey. He holds active licenses to practice in Connecticut, Florida, Massachusetts and New York.

Arnie grew up in New York and earned a Bachelor’s degree at SUNY-College of New Paltz and an earlier Master’s degree at the University of Florida. He lives and works in Canton, a small Connecticut community, with his wife Jill and a collection of very special animals. His daughter Allison works for an educational firm in New York and was recently engaged, and his son Bryan is a paramedic. Arnie holds certifications in veterinary journalism and emergency management and is a commercial pilot with instrument and multiengine ratings. Learn more about Arnie at:www.goldman4avma1.com.

Biographical summary provided by the candidate.