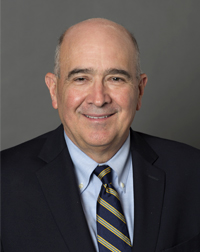 Dr. Sam Miller is a 1991 graduate of Texas A&M University and has been a practicing veterinarian for 30 years. He began practice in McAllen, Texas, and currently owns a five-doctor small animal practice in Houston.

During his time in McAllen, his primary focus was small animal medicine and surgery, with some mixed animal work, as well as after-hours emergency work. He was also actively involved with the local shelter in establishing the early spay/neuter and wellness programs. In 1995, he moved back to his hometown of Houston, where he began working at the Village Veterinary Clinic, which he eventually bought in 1998 and has grown into a progressive, five-doctor practice with 26 employees.

In September 2008, he found himself leading the veterinary response in the aftermath of Hurricane Ike which caused significant damage to the Houston/Galveston area. Working closely with city and state officials, they were able to respond to the needs of the veterinary community to address the animal-related issues during the disaster response. As a result of his leadership, he was recruited to work with local and state officials to develop disaster response guidelines for the city and state. For his efforts, Dr. Miller was recognized with an “Outstanding Achievement Award” by the Texas Veterinary Medical Association.

Dr. Miller continued his involvement in organized veterinary medicine at the state level serving six years on the Texas Veterinary Medical Association’s 36-member Board of Directors, followed by eight years on the Executive Committee, culminating in 2017 as the president of the Texas Veterinary Medical Association. Throughout that time, he was actively involved in leadership and advocacy for the state association. He was appointed as the liaison between the state VMA and the Texas A&M College of Veterinary Medicine. He headed two task forces, one to address the concern of veterinarians with non-profit organizations offering veterinary services and the second a task force charged with oversight of the sunset review process of the state’s veterinary licensing act. He received the President’s Award in 2016 for his service to the association.

He has been actively involved in legislative advocacy at the state level and has testified multiple times before various committee hearings to represent the interests of the veterinary community. He worked closely with key legislators to keep veterinarians out of overburdensome regulations of the Prescription Drug Monitoring Program and most recently worked to develop favorable legislation to address the veterinarian’s role in the opioid crisis.

After serving as president of the TVMA, he was elected to replace Dr. Mark Cox to represent Texas as an alternate delegate to the AVMA House of Delegates. In 2018, he was appointed to serve as a member of the AVMA’s Opioid Working Group to help address the issue of the veterinarian’s role in addressing the opioid crisis.

Dr. Miller has been married to his wife, Jane, of 31 years and has two children, Michael, 24, and Samantha, 22. He has been actively involved in his local community, serving as Cub Scout leader, baseball and softball coach, as well as Sunday School teacher. When not at work or serving his profession, he enjoys all outdoor activities but focuses his free time on his interests of ranching, hunting, fishing, cycling, and golf.