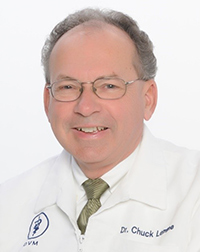 Dr. Chuck Lemme has been a small-animal practitioner since graduating from Iowa State University in 1975, and started his career as an associate veterinarian at Bramer Animal Hospital in Evanston, Illinois. It was there where he became involved in organized veterinary medicine, serving as a committee chair and then a board member of the Chicago Veterinary Medical Association.

In 1985, Dr. Lemme and his family moved to Cedar Rapids, Iowa, where he bought a small-animal practice and practiced until his retirement in 2018.

Dr. Lemme has served as president of the Midwest Small Animal Association and as an area director for the American Animal Hospital Association (AAHA). Dr. Lemme's involvement with AVMA began when he was selected to be the AAHA representative on the AVMA's Clinical Practitioners Advisory Committee to the Council on Biologic and Therapeutic Agents.

While serving on this committee, Dr. Lemme was selected to present the AVMA's comments at public meetings held by both the FDA Center for Veterinary Medicine and the USDA Center for Veterinary Biologics. He also was selected to be the small-animal practitioner representative on a working group made up of veterinarians from industry and the USDA, tasked with developing new, practitioner-friendly labeling for biologics.

At the state level, Dr. Lemme became involved in the Iowa Veterinary Medical Association (IVMA) by serving on the small-animal committee, first as a member, and then chair for several years. He has also served on the legislative committee and finance committee. Dr. Lemme was elected as a district representative on the IVMA Executive Board and then elected as vice president, before serving as president in 2007-08. He was honored in 2015 by being selected as the IVMA "Veterinarian of the Year." Dr. Lemme also served as the Iowa alternate delegate and delegate in the AVMA House of Delegates.

When he isn't practicing, Dr. Lemme enjoys cheering for the Iowa State University Cyclones, photography, running, and traveling. He has two children—a son, Patrick, who passed away in 2005, and a daughter, Beth, who lives in Mankato, Minnesota, with her husband, Joe, and four children.